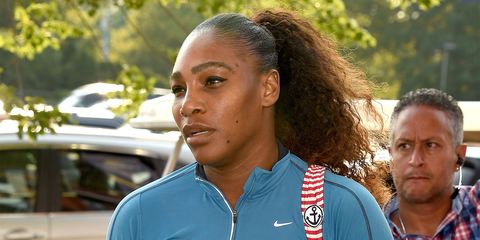 In a shocking moment for fans, Serena Williams lost the U.S. Open Women’s Final against Naomi Osaka on Saturday. Even more shocking than the loss, however, were the penalties that preceded it and Serena's reaction after the fact.

Chair umpire Carlos Ramos gave Serena a violation for illegal coaching from her player box during the first set, People reports. Serena fired back immediately at the violation, telling Ramos, "I don’t cheat to win, I’d rather lose. I’m just letting you know."

The tension between Serena and Ramos wasn't over there, however. The star athlete, who has been competing as a professional for 13 years and boasts an awe-inspiring 39 major titles, received the game penalty for a court violation. At this point, Serena lost her cool and went off on Ramos.

"You will never, ever, ever be on another court of mine as long as you live," she said.
"You are the liar. When are you going to give me my apology? You owe me an apology. Say it. Say you’re sorry. And you stole a point from me. You’re a thief, too!"

After the game, Serena refused to shake Ramos' hand, amidst boos from the crowd. At the post-match trophy ceremony, she put forth a more positive attitude, asking fans not to boo any more and praising her opponent's performance.

"Well, I don’t want to be rude, I don’t want to do questions," she said. "[Osaka] played well, this is her first Grand Slam. I know you guys were here rooting. Let’s make this the best moment we can. Let’s not boo anymore. We’re gonna get through this and we’re gonna be positive. No more booing!"

This content is imported from YouTube. You may be able to find the same content in another format, or you may be able to find more information, at their web site.
Kayleigh Roberts Contributor Kayleigh Roberts is the weekend editor at Marie Claire, covering celebrity and entertainment news, from actual royals like Kate Middleton and Meghan Markle to Hollywood royalty, like Katie Holmes and Chrissy Teigen.
This content is created and maintained by a third party, and imported onto this page to help users provide their email addresses. You may be able to find more information about this and similar content at piano.io
Advertisement - Continue Reading Below
More From Celebrity
Did Charles, Harry, and William Mend Relationship?
The Kardashians' Most Body-Confident Nude Shoots
Advertisement - Continue Reading Below
Chrissy Teigen + Meghan Markle Spoke About Loss
Prince Harry Is Back in Cali With Meghan
Lizzo Just Shared an Unedited Naked Selfie
Queen Elizabeth's Stationery Breaks Tradition
The Queen Shares an Emotional Birthday Message
Chloe From 'Too Hot to Handle' Is in 'The Circle'
Comparing the Two Biggest Royal Weddings
Kate, George, and Charlotte Were Seen Shopping