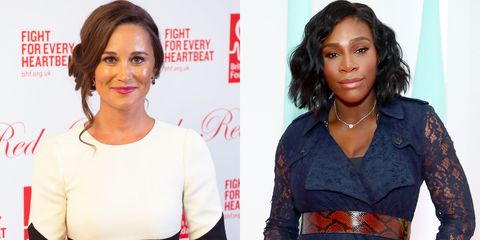 Pippa Middleton has revealed that she plans on taking cues from Serena Williams throughout her pregnancy—which makes sense, because even speaking from a non-pregnant point of view, it's hard not to feel inspired by the tennis pro. Middleton, who is pregnant with her first child with husband James Matthews, says she'll continue to safely exercise and play tennis. The 34-year-old is a columnist for U.K. supermarket Waitrose Weekend and took to this month's issue to discuss her plans to remain active.

“I’ve been a tennis fan since childhood, as player and spectator, and have been keen to continue playing safely through pregnancy,” she writes. “Take Serena Williams—she famously proved that women can play a high level of tennis from two months (when she won the 2017 Australian Open) up to eight months.” She's right—Williams epically won the Australian Open in January 2017 while secretly pregnant (Williams and now-husband Alexis Ohanian announced her pregnancy in April) and promptly became the girl boss we all needed.

"Few of us can relate to this elite excellence, but if you’re a healthy, well-trained player with an uncomplicated pregnancy there’s no reason why you can’t continue a good level of tennis," she adds. "Over the past two trimesters I've been playing regularly, mostly doubles, which requires less side-to-side movement and intensity. I haven't been giving 100% to every shot, instead just enjoying releasing energy through rallying, footwork and working on core strength."

The Duchess of Cambridge's sister is expected to give birth this fall. Here's hoping Middleton also takes cue's from William's tennis wardrobe—I'm still reeling from her ridiculously cool bodysuit at the French Open last month.

This content is imported from Giphy. You may be able to find the same content in another format, or you may be able to find more information, at their web site.
Related Story
Serena Williams Calls K-Midd One Heck of a Woman
Ruby Buddemeyer Beauty Editor Ruby is the beauty editor at Cosmopolitan, where she covers beauty across print and digital.
This content is created and maintained by a third party, and imported onto this page to help users provide their email addresses. You may be able to find more information about this and similar content at piano.io
Advertisement - Continue Reading Below
More From Celebrity
William Reveals Which of His Kids Is the Cheekiest
Serena Williams's Daughter Is Taking After Mom
Advertisement - Continue Reading Below
EmRata Opts for Faux Fur and Yeezy Boots
Rob Lowe: Prince Harry Is Rocking a Ponytail Now
Rihanna Stuns in $2 Million of Diamonds and Rubies
Fans Think Zayn Just Hinted at Proposing to Gigi
Ben Affleck Said J.Lo Faced "Sexist, Racist" Media
Kate & William Might Get Vaccinated on Camera
40 Rare Photos of Grace Kelly Through the Years
The Best TV and Movie Wedding Dresses of All Time