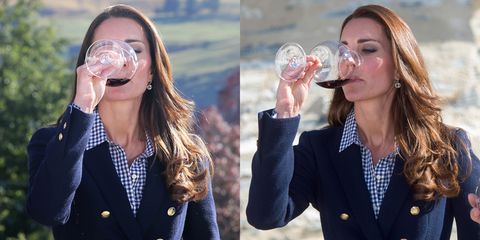 Are alcohol and feminism two of your favorite things in the world? Then you and Kate Middleton have a lot in common. In college, the Duchess of Cambridge founded an all-women drinking club, in the name of gender equality (and wine, we assume).

Related Story
Prince William Says He and Kate Are "Naughty"

The revelation comes courtesy of a 2007 Guardian article, so it's not exactly new, but maybe it's new to you and everyone deserves to know that Kate Middleton founded a drinking club.

"At university, Kate continued to grow in confidence," Oliver Marre wrote in the Guardian piece. "She co-founded a girls' drinking society, 'annoyed that the old ones excluded women.'"

No one involved in Kate's drinking society remembers the duchess getting very drunk (which isn't exactly surprising—Kate is probably one of the most composed and responsible people on the planet).

"It was just a student charity event," sources told The Guardian. "Tickets were £20, not £200 as reported, and the room was basically full of friends. It was no big deal."

Kate's days as founding member of a charitable drinking club predate her relationship with Prince William, meaning she was already being a mostly-sober charity angel back when she didn't have to worry about anyone in the press caring about what she did.

Of course, as a royal, Kate still enjoys a drink from time to time. Some of the best photos of her in existence are of her sampling alcohol from around the world.

Here she is in Australia, downing a glass of wine with Wills:

In Ireland, enjoying a Guinness:

And, still in Ireland, drinking a Harvey's Bristol Creme:

And in Liverpool, drinking a fruity (and virgin) drink called the "Duchess":

Cheers to you, Kate.

Pool/Samir HusseinGetty Images
Kayleigh Roberts Contributor Kayleigh Roberts is the weekend editor at Marie Claire, covering celebrity and entertainment news, from actual royals like Kate Middleton and Meghan Markle to Hollywood royalty, like Katie Holmes and Chrissy Teigen.
This content is created and maintained by a third party, and imported onto this page to help users provide their email addresses. You may be able to find more information about this and similar content at piano.io
Advertisement - Continue Reading Below
More From The Ultimate Guide to the Royal Family
The Queen's Corgis Are Helping Her With Her Grief
Charles is Looking Forward to Seeing Harry Again
Advertisement - Continue Reading Below
Will & Harry to Walk Together at Philip's Funeral
Prince Charles Addresses Prince Philip's Death
Prince William Pulls Out of 2021 BAFTA Appearances
Prince Philip Said He Had No Desire to Live to 100
The Queen Was by Prince Philip's Side When He Died
Prince Harry Is "Really Upset" Over Philip's Death
Will Harry & Meg Attend Prince Philip's Funeral?
The Queen Is Hopeful Prince Harry Will Return Home