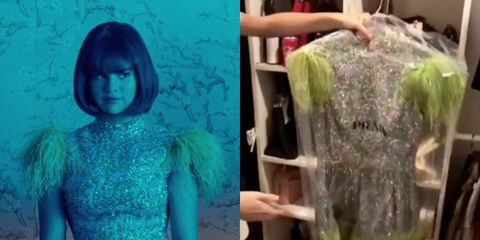 Selena Gomez would like to get her "Back to You" dress out of her damn closet, ASAP. The singer is so eager to see the green Prada dress gone, that she's actually offering it on Instagram to anyone willing to take it.

Clearly, she will get some offers.

In case you need a reminder, the dress in question is the green, sparkly, feathery number that Selena wears in the party sequences at the beginning and end of the video. You know, the ones that are very awkward:

Until the Selena character meets a certain tall, blonde bad boy, whom she proceeds to run away, steal (and then burn) a car, and fight passionately with:

If you saw the video and listened to the lyrics and thought, "Hey, 'Back to You' sounds like it's about Justin Bieber," then you were certainly not alone. When the song was released in May, fans immediately speculated that it was about Justin, who was, at that point, a guy that Selena still kept finding herself drawn back to.

Now, here we are, four months later, and Justin is all kinds of engaged to Hailey Baldwin and Selena is all kinds of excited to get that dress the eff out of her house. Related? Maybe, maybe not. A great opportunity for fans who would like to own a piece of Selena Gomez history? Definitely.

In a series of videos on her Instagram Story Saturday, Selena explained that the dress needed to go (she stumbled and forgot what video it was from at first, almost saying "Bad Liar"). She then invited fans to reach out if they wanted the dress, which obviously, they have.

Oh and here's the "Back to You" video, because it's genius and always worth a rewatch, no matter who it's about:

50 Celebrities Channeling Disney Princesses
The 50 Most Popular Episodes of ‘Friends,’ Ranked
Iconic Party Photos From the Past
The Best TV and Movie Wedding Dresses of All Time
26 Stars Who Appeared On '90s TV Shows
35 Unforgettable Royal Wedding Scandals