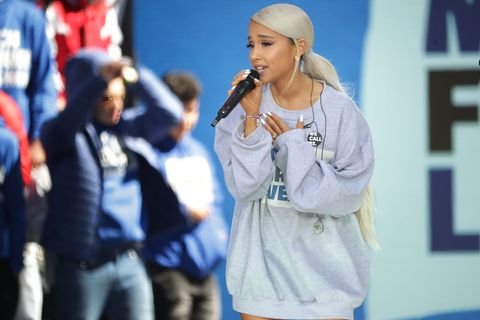 After a trying couple of years, Ariana Grande has announced her plan to take some time off to "heal and mend."

The singer released a statement about her decision to People, explaining via her reps that:

"Given the events of the past couple of years, Ariana is going to take some much-needed time to heal and mend. She will be staying close to home and using this period to spend time with her loved ones and work on new music without deadline. She thanks her fans for their understanding."

As the statement explains, the past couple of years have been emotional for Grande. On May 22, 2017, a suicide bomber set off an explosive device in Manchester Arena, just after the conclusion of Grande's concert in the venue. The attack resulted in 23 deaths and more than 500 injuries and prompted Grande to suspend her tour. On June 4 of that year, Grande hosted the One Love Manchester benefit concert, which raised $23 million for the bombing victims and families affected by the attack.

In June of this year, Grande opened up about the PTSD she's suffered as a result of the bombing.

"It's hard to talk about because so many people have suffered such severe, tremendous loss. But, yeah, it's a real thing," she told British Vogue. "I know those families and my fans, and everyone there experienced a tremendous amount of it as well. Time is the biggest thing. I feel like I shouldn't even be talking about my own experience – like I shouldn't even say anything. I don't think I'll ever know how to talk about it and not cry."

On Saturday, Grande tweeted that "everything will be okay" and sent love to her fans.

everything will be okay

i love u so v much