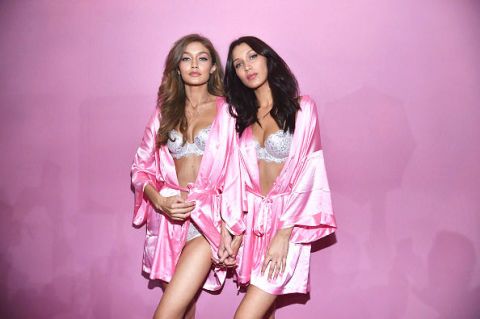 Before Gigi and Bella Hadid graced the stage at the Victoria's Secret Fashion Show last week in Paris, Gigi got really emotional discussing her and Bella's journey to get there. In a pre-show clip, she spoke on her experience as a child watching the show every single year and was excited to see that her dreams of walking in the show became a reality both this year and last. But the feels really came into play when she described how proud she was of her sister, Bella Hadid, and how she hard she worked to get to where she is today.

"I have watched the show every single year as a kid, so last year was so special to be able to do it," she said (via Daily Mail). "This year, joining me is my little sister!"

She went on to praise Bella's success thus far. "I am so proud of [Bella] for getting this show because she worked so hard. [And] for us to be able to do it together, and be the first sisters in the show, we're really, really honored."

Later on in the clip, Bella joined Gigi, who was equally as emotional saying: "This is us happy. We're a really emotional family."

"It's amazing to be able to experience all this and to be so excited for each other," Gigi said. "She's my best friend and it's so crazy to be here together."