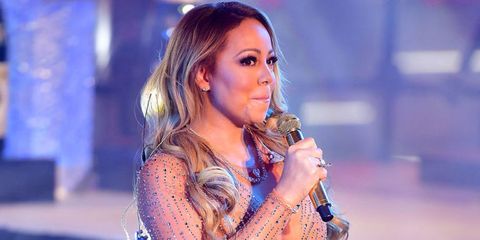 Mariah Carey truly doesn't care if you thought her New Year's Eve performance was a disaster. After technical difficulties plagued the pop icon's performance on ABC's Dick Clark's New Year's Rockin' Eve with Ryan Seacrest, Twitter unleashed its wrath on the singer, but she had the BEST response to the hate.

"Shit happens 😩 Have a happy and healthy new year everybody!🎉 Here's to making more headlines in 2017 😂," she captioned a GIF of herself shrugging.

Shit happens 😩 Have a happy and healthy new year everybody!🎉 Here's to making more headlines in 2017 😂 pic.twitter.com/0Td8se57jr

As Time reports, Carey took the stage just before midnight to belt out "Auld Lang Syne" and then perform her hit, "Emotions"—which is when the difficulties started. When no one stepped in to fix the technical issues, Carey totally gave up on singing and instead walked casually around the stage, joking and trying to explain what was happening to viewers.

We have to give Mariah Carey credit for being the embodiment of the shrug emoji about the whole thing. ¯\_(ツ)_/¯ forever, Mariah.

Kayleigh Roberts Kayleigh Roberts is the weekend editor at Marie Claire, covering celebrity and entertainment news, from actual royals like Kate Middleton and Meghan Markle to Hollywood royalty, like Katie Holmes and Chrissy Teigen.
Advertisement - Continue Reading Below
More From Celebrity
Prince Harry and Meghan Markle's 53 Cutest Moments
RiRi Was Shocked by the Reaction to Fenty Beauty
Advertisement - Continue Reading Below
Behold: Celebrities Who Dated Normals
Kate Middleton & Michelle Obama Use This $64 Cream
A Full Timeline of Tyler C. & Hannah B.
Blake and Ryan Donate $400K to NY Hospitals
Prince William May Work as an Air Ambulance Pilot
Harry Is Likely to Get U.S. Diplomatic Status
Harry Was Forced to Give Up His Military Titles
Ariana Grande Revealed Her Natural Curls