In a rare, candid interview, Sarah Ferguson, the Duchess of York and mother to Princess Beatrice and Princess Eugenie, opened up about her late friend, Princess Diana. Before her tragic death, the pair were extremely close, and shared a strong bond, having both married into the whirlwind of royal life. Now, Fergie has shared what she imagines Diana would have thought about her beloved sons, Princes William and Harry, as well as their Duchess wives, Kate Middleton and Meghan Markle.

Having given a touching live interview on Good Morning Britain this week, Fergie is certain that Princess Diana would be bursting with pride at the men that her two sons have grown up to be, as well as the women they chose to marry. “She’d really just be so proud. Even before they got married, Diana would have been just literally going ‘I can’t believe these boys have done so well’,” Fergie said with her famous good humour.

“They are such a credit to her,” she continued, adding that Diana would have “loved every moment” of her son’s weddings.

The Duchess of York says Princess Diana would have 'loved every moment' of William and Harry's weddings.
She says that she continues to 'miss her' 21 years after her tragic death. pic.twitter.com/biQORCKb0G

As for Kate and Meghan, the Duchess of York also explained that Diana would more than approve. Fergie reflected on the message that the late princess might have for her daughters-in-law. “She had this enormous compassion and I honestly think she’d be so proud of the wonderful Meghan and Catherine as well, she’d want to embrace them and say ‘You’re doing well’,” Sarah said.

Touchingly, Fergie added of her late friend: “I miss her, no one made me laugh better than her. She was hilarious.”

While Fergie was not invited to William and Kate’s nuptials in 2011, the Duchess of York was present when Harry and Meghan tied the knot at St George's Chapel, Windsor Castle, in May—probably because, as a non-state occasion, there was less pressure around the guest list. It's since been reported that Buckingham Palace may have reportedly pushed for Sarah to not be invited—but Harry pushed straight back. 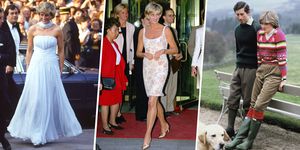 Princess Diana's 50 Best Style Moments
Lucy Wood Contributor Lucy Wood spends most of her time writing about celebby things, reading books, and waiting for the glorious day that she have enough millions for a pet sloth.
This content is created and maintained by a third party, and imported onto this page to help users provide their email addresses. You may be able to find more information about this and similar content at piano.io
Advertisement - Continue Reading Below
More From The Ultimate Guide to the Royal Family
Will Asked His Uncle to Talk to Harry About Meghan
Why the Queen Denied Meghan's Wedding Tiara Pick
Advertisement - Continue Reading Below
Will & Harry's Reactions to Their Parents' Divorce
Harry & Meghan's Drama Won't Be on 'The Crown'
Will's Talk with Charles That Led Him to Kate
The Queen Saved Will from a Breakdown as a Teen
Prince Philip Has "Walked Away" From Prince Harry
Jessica Mulroney Slams Fake Friends on Instagram
Princess Charlene of Monaco's Top Looks
Diana's Note About Her BBC Interview Is Missing