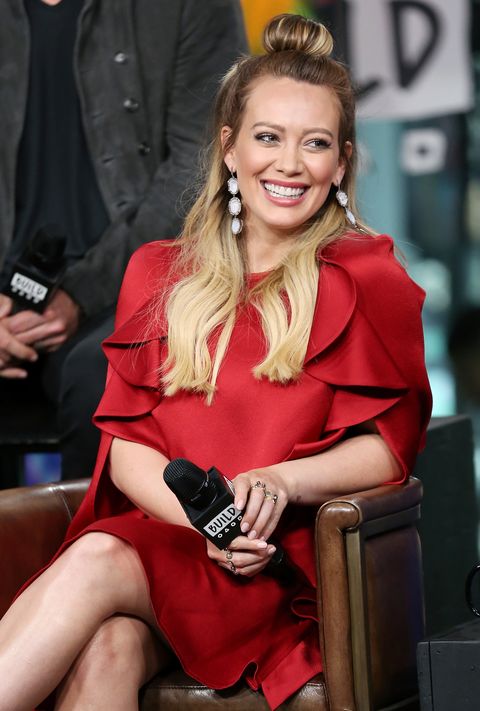 Lizzie McGuire might just be the next classic from your childhood to get the reboot treatment. In a new interview with Entertainment Tonight, Hilary Duff, who made her mark playing titular teen Lizzie on the Disney hit from 2001 until 2004 (and then again on the big screen in The Lizzie McGuire Movie, of course), said a Lizzie reboot is definitely possible.

In fact, it's already something that's being discussed.

"There’s been some conversations," the Younger actress, who is now 31 (feel old yet?), said."It’s definitely not a go. I don’t want to get everyone wild talking about it."

"I think she was so important to girls at an important time in their life. If she could be important to them again at this age, I think that would be amazing."

And what, exactly, would a Lizzie McGuire reboot look like? Duff revealed a little bit about where she thinks her character would be today.

“There’s been lots of conversations about [where Lizzie would be in 2018]," she said. "I’m racking my brain. I don’t think she’s a mom yet, but she might be getting there soon."

Even though nothing is official yet, Duff, like every other girl who came of age during the early aughts, is excited about the very idea of more Lizzie.

"It’s fun. I feel excited," she said of the interest in a reboot. "It could be a possibility or it could be nothing, so we’ll see."

Kayleigh Roberts Contributor Kayleigh Roberts is the weekend editor at Marie Claire, covering celebrity and entertainment news, from actual royals like Kate Middleton and Meghan Markle to Hollywood royalty, like Katie Holmes and Chrissy Teigen.
This content is created and maintained by a third party, and imported onto this page to help users provide their email addresses. You may be able to find more information about this and similar content at piano.io
Advertisement - Continue Reading Below
More From Celebrity
The 6 Most Expensive Royal Wedding Dresses
Inside Kitty Spencer's Stunning £19 Million Home
Advertisement - Continue Reading Below
Meghan Was Hit With Thousands of Vile Comments
Watch Meghan's Candid 2013 Larry King Interview
Kate & William Are "Besotted" with Their New Puppy
J.Lo Re-creates "Love Don't Cost a Thing" Video
Meghan Markle Made Prince Harry a Better Man
See a Rare Portrait of Princess Diana's Mother
Kelly Ripa's Husband Left Her a NSFW Comment
Jennifer Lopez on Learning to Love Herself