Penn Badgley, best known as Dan from Gossip Girl and Joe from You, has stayed quiet about his love life in recent years. He most famously dated his Gossip Girl costar Blake Lively and Zoe Kravitz—but in 2014, Badgley settled down with Domino Kirke, and rarely says anything in public about his now-wife (the two married in 2017). Kirke, a doula and singer, has more than one showbiz connection—she's also the sister of Jemima Kirke.

Here's what we do know about the low-key couple, who are expecting their first child.

In an Instagram post in early February, Kirke opened up about her two losses that had preceded her current pregnancy. "It takes everything I’ve got to detach lovingly from the losses I’ve been present for and be in my own experience," she wrote.

She also posted two photos to her Instagram Story that referenced the pregnancy—one showed her glowing and visibly pregnant in overalls, and the other showed her and Badgley in bed with their "first baby," their rescue pup.

She has a famous family.

Kirke, who is English-American, has one famous sister you've probably already heard of: Girls star Jemima Kirke. Kirke's sister Lola is also an actress and appeared in Gone Girl. Their dad, Simon Frederick St. George Kirke, is a drummer from bands Free and Bad Company.

Kirke takes after her famous father and is a singer. As reported in Bustle, Kirke has recorded music with Mark Ronson, and her work has been featured by Lena Dunham.

For her last album release in 2017, Beyond Waves, Badgley was sweet and supportive on social media:

.@DominoKirke has released a gorgeous record that will stand the test of time https://t.co/FXzOCQkQLA

She's a doula and entrepreneur.

Kirke doesn't talk much about her private life on social media, but she does talk about her work as cofounder of Carriage House Birth, which provides various services for pregnant women. Vogue called her a "triple threat": musician, mom, and doula.

Nobody knows exactly how they met, but Us Weekly spotted the pair first in July 2014. "They've been dating for awhile. They have a number of mutual friends. It is a very mature and free relationship," according to a source at the time. "Domino is a great girl for him, being a musician. Their interests align."

They're low-key in love.

The couple don't pose for red-carpet photos very often and aren't often snapped together on the street (Badgley has said he's not a fan of social media, and clearly prioritizes his privacy.) Kirke mentions Badgley only sparingly on her social media, occasionally making sweet posts for events like Badgley's birthday:

In a civil ceremony at a Brooklyn courthouse, Kirke and Badgley married in front of family and friends. Badgley's bandmate Darren Will posted a sweet photo, calling them "a couple beautiful people."

Kirke's sister Lola shared a sweet shot of the sisters and Cassius, Domino's son from a previous relationship.

Sister Jemima also got in on the action, to hilarious effect:

Congratulations ya shitheads! @PennBadgley and @DominoKirke it's all downhill from here. In a good way!

And they had a second reception.

Technically, the couple had two celebrations, according to Badgley: The quiet courthouse wedding, and one enormous reception, courtesy of Kirke's mother.

Their love is spiritual.

In a rare interview on the subject, Badgley told People that his path to spirituality led him to Kirke. “I don’t think I could truly value human love until I developed divine love,” he said. “[Domino and I] very much had a romantic beginning, and I think that you discover in marriage that what sustains a marriage for decades—there are less and less people who can tell us this—but I think it has something to do with [divine] love.” 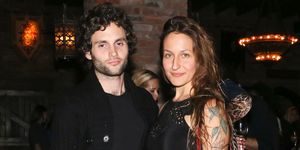 Penn Badgley Marries Domino Kirke
Penn Badgley Is Basically Gossip Girl Again
Katherine J Igoe Katherine’s a Boston-based contributing editor at Marie Claire online who covers celebrity, fashion, entertainment, and lifestyle—from “The Bachelor” to Everlane to Meghan Markle.
This content is created and maintained by a third party, and imported onto this page to help users provide their email addresses. You may be able to find more information about this and similar content at piano.io
Advertisement - Continue Reading Below
More From Celebrity
Beyoncé Wore Tweed Micro Shorts for Date Night
Prince Charles Addresses Prince Philip's Death
Advertisement - Continue Reading Below
Prince William Pulls Out of 2021 BAFTA Appearances
J.Lo Wears a Crop Top and Gold Joggers on Set
Prince Philip Said He Had No Desire to Live to 100
JT Is in the Throwback Pic Britney Posted on IG
The Queen Was by Prince Philip's Side When He Died
Prince Harry Is "Really Upset" Over Philip's Death
Will Harry & Meg Attend Prince Philip's Funeral?
The Queen Is Hopeful Prince Harry Will Return Home