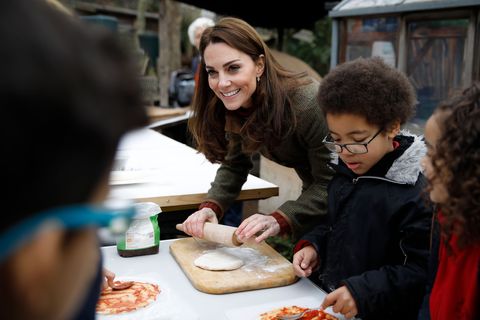 Pizza: It's amazing. Just ask, well, you know, literally anyone ever—even members of the royal family. It's hard to imagine the royals eating a commoner food like pizza, but they do, (remember when someone ordered a ton of pizza at Prince Harry and Meghan Markle's wedding?). In fact, they eat pizza often enough to have strong (and, in some cases, kind of controversial) opinions about pizza toppings.

Earlier this week, Kate Middleton visited the Islington community garden in north London, where she met with fans, including a group of pizza-loving kids. Kate took some time during her visit to make pizzas with the kids and engage in some toppings-related small talk.

In a video shared on Twitter by Daily Mail royal correspondent and all-around royal expert Rebecca English, Kate can be overheard talking about her preference for bacon over pepperoni as a pizza topping. The real controversy isn't in the preference itself, but in Kate's reason: She thinks pepperoni is a spicy meat, apparently:

"Does anyone ever put bacon on a pizza? Bacon’s great. Do you not think that sounds good? I quite like that actually…It’s like having pepperoni but it’s not as spicy."

The Duchess of Cambridge's answer set off a bit of an uproar on Twitter, where people were thrown into existential crises over the fact that Kate Middleton thinks pepperoni is spicy. The collective confusion is enough to make you almost miss what is perhaps the best part of the video, however: When a little girl asks Kate if the Queen has ever had pizza.

I can’t even tell you how many brilliant things there are here: Kate’s reaction to cheese and cucumber pizza; George learning about space in school - and best of all the little girl who asks her whether the Queen eats pizza! 🍕 The answer was......watch on! pic.twitter.com/RXTH8DjAwA

"That is such a good question," Kate replied. "I don't know. I don't know...maybe next time I see her I should ask."

Also ask what her favorite toppings are and if she thinks pepperoni is spicy, please. 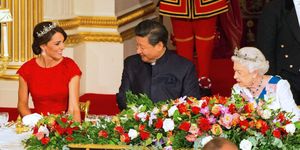