Today, it's hard to imagine the royal family without Kate Middleton. The Duchess of Cambridge might only be a royal by marriage, but she's as poised and regal as anyone else who's ever worn a tiara. Kate won the public over quickly, but apparently it took a little longer for her to win over her future in-laws—specifically, the most important in-law of all, Queen Elizabeth II herself.

According to a report by Express, the Queen was pretty critical of Kate back when she was still just a royal girlfriend and not yet a Duchess. The reason is pretty shocking: The Queen apparently didn't think Kate did enough. Phil Dampier, an expert who has been reporting on the royal family for more than 20 years, explained:

"Kate was William’s girlfriend for eight or nine years before they got engaged and got married. The Queen once remarked Kate doesn’t do very much so I think she had a fairly long entrance to the Royal family."

That's hard to believe now, since Kate is one of the busiest, hardest working people on the planet. She attends countless royal engagements, works with several important (and seemingly time-consuming) charities, and finds time to be a doting mom to her three kids, Prince George, 5, Princess Charlotte, 3, and little baby Prince Louis, 8 months. The Queen seems happy with Kate's full schedule now, but, back in the day, she didn't think Kate was doing all that much.

Dampier, for one, doesn't think that Kate's light load of royal appearances while dating Prince William was because she was lazy or standoffish or anything like that, though. He's of the opinion that Will was actually behind Kate's "not doing much."

“William, because of what happened to his mother, was very protective of her and always has been since then," he said. "She only does what she wants to do and is comfortable with and isn’t put under too much pressure and scrutiny. His family’s been his number one priority." 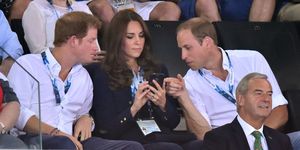 Kate Middleton Is Now on Twitter and Instagram
Kate Middleton's Homemade Xmas Gift for the Queen
Kayleigh Roberts Contributor Kayleigh Roberts is the weekend editor at Marie Claire, covering celebrity and entertainment news, from actual royals like Kate Middleton and Meghan Markle to Hollywood royalty, like Katie Holmes and Chrissy Teigen.
This content is created and maintained by a third party, and imported onto this page to help users provide their email addresses. You may be able to find more information about this and similar content at piano.io
Advertisement - Continue Reading Below
More From The Ultimate Guide to the Royal Family
A Body Language Expert on the Oprah Interview
See an Adorable New Sussex Maternity Shoot Photo
Advertisement - Continue Reading Below
Why Is the Royal Family Called "The Firm?"
Prince Harry: The Queen Was Advised Not to See Me
The Palace Had Concerns About Archie's Skin
Harry Says Racism Was "A Large Part" Of Leaving
A Look Back at Princess Anne's Life in Photos
A Look at Royal Family Portraits Through the Years
Meghan and Harry Share a Sweet Home Video
Prince Harry: "I Think My Mum Saw It Coming"