There's a new lady love in Rob Kardashian's life and her name is Alexis Skyy. Here's everything you need to know about the new woman in Rob's life.

1. She grew up with a complicated family life.

Alexis comes from a "strict Caribbean background," and was raised under strict rules. She didn't meet her biological father until she was 18 and strained her relationship with her mother when she decided to go live with her dad.

Alexis dated rapper Fetty Wap for two years. The relationship ended in 2016, when Alexis learned that Fetty had cheated on her with his ex-girlfriend Masika Kalysha, with whom he shares a child. She previously had a tattoo in his honor above her ear, but got it covered up with a feather after the relationship ended.

Alexis and Fetty's relationship has been off and on since their split. In January 2018, the couple welcomed a daughter, Alaiya.

3. You might know her from Love & Hip Hop: Hollywood.

In a now-deleted comment exchange captured forever by The Shade Room, rapper Kid Buu (who is currently dating Rob's ex/baby mama, Blac Chyna) asked Alexis straight out if she was really into Rob or just using him for "clout." Alexis wasted no time answering and declaring her feelings for the reality star/sock mogul, writing (among other, less-than-friendly things), "to answer your question…I love rob." 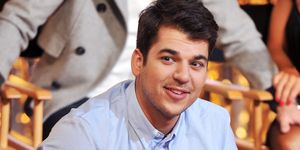 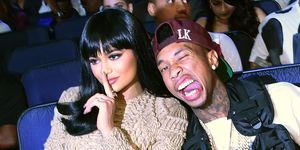 Kylie Jenner Comments on Rob & Blac Chyna
Kayleigh Roberts Contributor Kayleigh Roberts is the weekend editor at Marie Claire, covering celebrity and entertainment news, from actual royals like Kate Middleton and Meghan Markle to Hollywood royalty, like Katie Holmes and Chrissy Teigen.
This content is created and maintained by a third party, and imported onto this page to help users provide their email addresses. You may be able to find more information about this and similar content at piano.io
Advertisement - Continue Reading Below
More From Celebrity
Will's Friends Made "Jibes" About Kate's Mom
William Will Suffer "Worst" from Harry's Memoir
Advertisement - Continue Reading Below
Simone's Boyfriend Sent Her the Sweetest Message
Harry's Friends Don't Want to Be in His Memoir
Will & Kate's Modern Approach to Raising George
Meet Simone Biles's Super Supportive Parents
What Happens on Katie's Season?
Bennifer Recreated Their 2002 PDA Moment
Why Harry's Memoir Release Date Has Upset People
The Royals Are Worried About Prince Harry's Memoir