Rachel Brosnahan has become a media darling for her rich, complex portrayal of the titular single mom and comedian in The Marvelous Mrs. Maisel. She's been hitting the award circuits with the very handsome Jason Ralph (also an actor, FYI, but we'll get to that in a sec). The couple recently started wearing wedding rings, prompting everyone to speculate they'd just gotten married. Nope! In a surprise twist, turns out Brosnahan and Jason Ralph have been together for a WHILE.

They're not exactly "secret" anymore (after all, she thanks him when she gets awards and brings him along to ceremonies), but they are still tightlipped and private. And story is a great one.

The mostly private and adorable couple have been spotted out and about as recently as September. The pair, who attended the US Open Men's finals in their home of New York, exuded perfect casual wear. Both wore glasses (I really need to know where Rachel got her sunnies) and, in Ralph's case, a pretty fabulous bolero hat:

Otherwise it's been pretty quiet for the couple, other than a couple of quiet red carpet appearances:

But the couple is always sure to keep their private life away from the cameras, for the most part, including in interviews.

In professional news, Ralph's character Quentin on The Magicians died, meaning he's exited the show that's helped make him a household name. TBD on what's next for him professionally, but judging by his Instagram, the couple more than have their hands full with their cute, cute doggos:

If you've seen The Magicians, you'll recognize Ralph, who hails from Texas but headed to New York to pursue his dreams. Before transitioning to TV, Ralph was a Broadway actor most known for playing Peter in Peter Pan and the Starcatcher.

Currently, Ralph stars as the lead in The Magicians, a sci-fi show about a magical school, and he also has a recurring role on the Hilary Duff TV show Younger.

At this year's SAG Awards (where she took home the award for best actress in a TV comedy), Brosnahan gave a short but ultra-sweet shoutout to her husband. "Jason, I love you. I wouldn’t be here at all without you. Thank you,” she said.

The couple reportedly got together in 2015.

Brosnahan and Ralph apparently worked together on the WGN series Manhattan—which was about the race to build an atom bomb—and that may have been where they met. It's seem most likely that this is about when they became a couple.

They kept their marriage VERY quiet for a long time.

They were spotted wearing wedding rings in September 2018, so fans naturally assumed that they'd just tied the knot. Not true, said Brosnahan. "We’ve been married for years and been together for even longer," she said. "We had a good laugh when the news came out that we had just got married, like ‘Happy six-month anniversary, honey!’"

It isn't totally clear exactly when they tied the knot; People reported that they got married sometime in 2018, but that's probably not true, given what Brosnahan has said.

And it was for a good reason.

Brosnahan gave a statement that clarified why the couple is usually tight-lipped but providing more details now:

"I’ve been quite private about my personal life for a few reasons. The first being that it’s just that…personal. Jason and I also noticed early on that, while we are both the leads of successful television series, he has almost never been asked about our relationship while I have been asked on almost every red carpet I have walked in the last 2 years. We both find this double standard problematic and frustrating and opted to redirect those conversations to our work.”

That actually makes sense to me—and it's nice that Ralph is supportive of his way in that way.

He's a feminist and activist.

In case we needed any proof (we don't), Ralph showed a subtle but really powerful sign of solidarity with his wife and other women in Hollywood during this year's award season.

Ralph has also attended women's marches and other political events. He (along with the other The Magicians cast) encouraged their fans to go and vote in the midterm elections in an Instagram video.

They show up on each other's social media occasionally.

Now that they're no longer quite so incognito, Brosnahan will occasionally share shots of her beau, especially when they show up together for awards (and vice versa). You have to scroll through, but there's a cute, candid photo of Ralph grinning for the camera while Brosnahan grabs a well-deserved post-award snack.

A few more from #goldenglobes...cuz man oh man do I love these dorks. (some dorks not pictured because we put down our phones and had real life conversation with each other) 💛

The couple is also occasionally snapped candidly together, like when Brosnahan almost got whacked in the face by a stray basketball at a recent Knicks game. 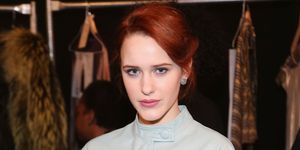 Rachel Brosnahan Is Team Claire in House of Cards
Katherine J Igoe Katherine’s a Boston-based contributing editor at Marie Claire online who covers celebrity, fashion, entertainment, and lifestyle—from “The Bachelor” to Everlane to Meghan Markle.
Advertisement - Continue Reading Below
More From Celebrity
Khloé Kardashian Is Being Trolled Over Febreze
A 'Friends' Reunion Special Is Coming to HBO Max
Advertisement - Continue Reading Below
Katie Holmes Is in Head-to-Toe Chloé at Their Show
Ariel Winter Now Has Strawberry Blonde Hair
46 Stars Who Dated Before They Were Famous
Every Easter Egg in Taylor Swift's 'The Man' Video
Kate Middleton Does Some Sports in $38 Sneakers
Sarah Hyland Defends Ariel Winter’s Dress on Insta
Prince Harry Wants to Go by Just "Harry" Now
Ashley Graham Talked Breast Pumping in an Uber