Lin-Manuel Miranda is capping off an incredible few years—the hit musical Hamilton that won him a Pulitzer, the music he created for Moana, his starring role in Mary Poppins Returns—with several Oscar nominations, thanks to Mary Poppins. It's not clear whether he'll perform at the Academy Awards, but he'll likely be there to support the film and crew. And with him may be Lin-Manuel Miranda's impressive wife, Vanessa Nadal, who's been by his side since the very beginning.

Here's what we know about the adorable couple. Prepare yourself, please, because I'm about to gush.

Nadal is impressive, to say the least. The New York-based lawyer went to MIT for undergrad, and worked as a scientist for Johnson & Johnson. Then, she switched directions and went to Fordham for law school, according to her LinkedIn. She practiced at law firm Jones Day until 2015.

Still, throughout his senior year Mr. Miranda could never manage to talk to Vanessa Adriana Nadal, a Latino sophomore he admired. “She was gorgeous and I’m famously bad at talking to women I find attractive,” said Mr. Miranda, now 30. “I have a total lack of game.”

The two reconnected in 2005 when Miranda invited her to some of his shows. "When he came onstage, I thought, I really like this guy,” Nadal said. “He was up there free-styling and weaving rhymes together. It’s pretty impressive. He’s really, really smart.”

The couple got married at the Belvedere Mansion in New York, and it was apparently a tour de force of musical talent. A full orchestra and Broadway singers performed, as did Miranda. He dedicated an entire number ("To Life" from Fiddler on the Roof) to her. Are you crying yet? Because I am.

They have two kids.

The couple have two sons together, Francisco (born in 2018) and Sebastian (born in 2014). Miranda announced the birth of their second child in the most Miranda-y way possible:

[The screams reach a delirious crescendo. FRANCISCO MIRANDA enters. He is 7 pounds and 13 ounces.]

And the two incorporate their kids into their professional world:

Sebastian Miranda at the matinee. pic.twitter.com/wIE2d2RnWM

They have an adorable dog.

In addition to being madly in love and building a sweet family, Nadal and Miranda also casually adopted a stray puppy from the Dominican Republic. Ugh, so perfect:

7 years ago we spent Thanksgiving in the Dominican Republic & this half-starved, stray puppy jumped up on @VAMNit’s beach chair & nibbled her ankle.
Our hearts cracked open;
Tobillo had arrived, with all her fearlessness, tenacity & joy.
We made room; she curled right up. pic.twitter.com/lWxNZbhTwQ

The couple is lovey-dovey.

Here they are, being adorable as can be after Miranda got his star on the Hollywood Walk of Fame (also, you can spot Nadal's MIT "brass rat" class ring!):

She's THE most supportive wife.

Nadal is only the world's greatest cheerleader for Miranda and everything that he does. Exhibit A:

...on your many months of hard work with your amazing Mary Poppins cast & crew to create a new movie that is so good, it gets better everytime I see it; pic.twitter.com/xx5lqZC1Oy

...on years of hard work with your amazing Hamilton cabinet, resulting in a special Kennedy Center Honors (whaaat); pic.twitter.com/uzkKucfwKt

Aaaaand Exhibit C, all part of the same Twitter thread:

...and on decades of hard work that made you, you, you Hollywood Star. I love you. pic.twitter.com/ZjQxikLUQB

And Miranda is in awe of her.

Miranda thanks his wife whenever he wins awards (so, a lot). For his first Tony win for Best Musical (In the Heights) he rapped, "Vanessa, who still leaves me breathless, thanks for loving me when I was broke and making breakfast."

And at the 2016 Tonys, for his speech to accept Best Original Score for Hamilton, he said, "My wife’s the reason anything gets done. She nudges me towards promise by degrees. She is a perfect symphony of one. Our son is her most beautiful reprise."

Wherever you are, you can probably hear my sobbing by now. 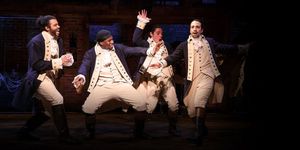