Before she was the Duchess of Cambridge—before she was even the girlfriend of a prince—Kate Middleton was just a normal teen working terrible jobs for almost no pay. The summer before Kate started college at the University St. Andrew's (where she would meet Prince William and begin her fairytale love story), Kate scraped together extra cash by working as a deckhand.

Like many jobs held by young people, the pay was low and the hours were long. Kate earned just $75/day for her trouble and worked from 7 a.m. until at least 6 p.m. That means that, during a typical 11-hour day on the boat, Kate was earning roughly $6.81 per hour. To do hardcore manual labor. Oof.

In her book Kate: The Future Queen, royal expert and biographer Katie Nicholl says that Kate spent four months working on Challengers at the Ocean Village Marina in Southhampton. Nicholl wrote of Kate's time on the job:

"She took her meals on the boat and slept in a sparse and very small cabin in a bunk bed she shared with a fellow female deckhand....The boats were hired out by businesses eager to treat their clients to a day of luxurious hospitality, culminating in an afternoon racing on the Solent, the strait that separates the Isle of Wight from the mainland of England. As well as washing the decks, Kate was expected to help load the 660-pound catering boxes on board and wash and pack away the sails at the end of the day."

"It was back-breaking work," Cal Tomlinson, one of the skippers Kate worked under at the time, told Nicholl for the biography. "Kate mucked in and was very professional. She fitted right in, although she did stand out for being so pretty. She spoke well, she was very attractive, and she an air about her. She was competent and confident but very unassuming. She was polite and respectful to whoever was in charge of her and neat as a pin. She was never wore any makeup; she was naturally beautiful." 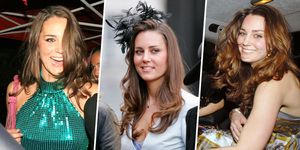 Woa: Kate Middleton's Beauty Evolution is *Insane*
Kayleigh Roberts Contributor Kayleigh Roberts is the weekend editor at Marie Claire, covering celebrity and entertainment news, from actual royals like Kate Middleton and Meghan Markle to Hollywood royalty, like Katie Holmes and Chrissy Teigen.
This content is created and maintained by a third party, and imported onto this page to help users provide their email addresses. You may be able to find more information about this and similar content at piano.io
Advertisement - Continue Reading Below
More From The Ultimate Guide to the Royal Family
Will and Kate Attend the ‘No Time to Die’ Premiere
Harry Carries Briefcase That Reads "Archie's Papa"
Advertisement - Continue Reading Below
Meghan Markle and Prince Harry Arrive in NYC
Princess Beatrice Reveals Daughter's Name
How Meghan & Harry Spent Their 2-Year Anniversary
Charlotte Has Two Major Milestones Coming Up
Kate Made a Very Common Shoe Shopping Mistake
The Queen Is Lawyering Up, Apparently
Harry & Meghan Are Still Close to the Queen, TYVM
Archie Inspired Harry and Meghan to Take a Stand