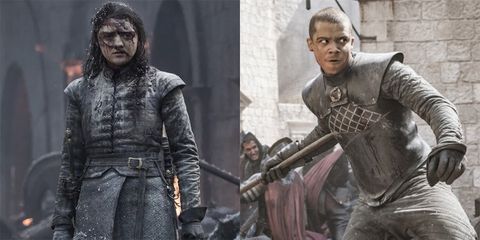 Previously in Westeros, Daenerys Targaryen turned the temperature up to maximum heat when she went on a relentless, fiery rampage through King’s Landing, burning every man, woman, and child in sight and giving approximately zero effs while doing it. With the city in charred ruins, and Arya Stark just about managing to ride off into the sunset on a white horse, it looks as though that crazy queen has pretty much sealed her fate. I was rooting for you, Daenerys, we were ALL ROOTING FOR YOU.

It seems inevitable now that someone out there will have to bring an end to the Mad Queen, and there’s a few possibilities as to who might deal the blow. Jon Snow and Sansa Stark are definitely up there, but this theory involving Arya and Dany’s loyal solider Grey Worm might be my favorite of them all.

Arya was right there in King’s Landing to witness the betrayal of Jon and Tyrion’s trust, and the total devastation that Dany and Drogon left in their wake. I mean, she literally saw that kid and her mom turn to dust. If anyone’s gonna be pissed about this whole thing, it’s her.

But, of course, Daenerys is going to be more than aware of how much danger she’s in now, having made an enemy of… well, everyone. According to Reddit fan Hoowuurd, it’s going to come down to Arya adding Grey Worm to her kill list, just before the Khaleesi. She’ll then use Grey Worm’s face to get close enough to Daenerys to bring her down. TOLD YOU IT WAS GOOD.

“The obvious problem is getting close to Dany, as well as killing her without it being frowned upon by the realm,” the theory goes. “This will lead to Arya killing Grey Worm, as I mentioned he’s been chaotic, plus he’s Dany’s right-hand and slightly starting to go crazy after he lost his love.

“Arya will use Grey Worm’s face to kill Dany, and set it up to look as if either Grey Worm killed Dany and then himself, or just flee the scene and leave it a mystery to the realm.”

If true, it’ll be a throwback murder technique for Arya, who killed all of House Frey while using Walder Frey’s own face, in revenge for the death of her brother Robb and mother Catelyn.

Sigh, watch Daenerys now get killed by Jon in an emotional, slow-paced and heartfelt lovers' scene. But fingers crossed for this theory, because it would be truly epic.

Related Stories
New 'GoT' Theory Foreshadows the Dragons' Fates
Don't Miss This Cult-Favorite HBO Special
'GoT' Fans Think There's a Clue About Arya's Fate
Lucy Wood Contributor Lucy Wood spends most of her time writing about celebby things, reading books, and waiting for the glorious day that she have enough millions for a pet sloth.
This content is created and maintained by a third party, and imported onto this page to help users provide their email addresses. You may be able to find more information about this and similar content at piano.io
Advertisement - Continue Reading Below
More From Celebrity
Joie de Tracee
Jennifer Lopez and Ben Affleck: Everything We Know
Advertisement - Continue Reading Below
Harry & Oprah's Mental Health Doc Has a Title
Serena Williams Might Miss the Tokyo Olympics
Jennifer and Ben Have "Unreal" Chemistry Together
The Sussexes Marked Archie's Bday in a Lovely Way
Queen's Cousin Accused of Selling Access to Putin
Meghan Wore a Meaningful Necklace for Vax Live
How Celebrities Are Celebrating Mother's Day 2021
Gabrielle and Kaavia's Mother's Day Pic is So Cute