After almost getting trampled by civilians in Kings Landing and narrowly avoiding being killed by dragonfire in episode five of the last season of Game of Thrones, Arya is seen riding off on a white horse, free to choose her own destiny for the first time in her life. In addition to the obvious symbolism (she takes care of the horse of the little dead girl she tried to save, she rode in on a black horse and rode out on a white one—her soul is pure, etc. etc.), it's a kind of sudden character turn. She decides her years-long grudge against Cersei is no big thing, just like that?? So, with that in mind, fans are now speculating that there's more than meets the eye in that final scene.

According to PopSugar, one of the theories is that Arya is actually dead, and she's riding off into the afterlife. That's a theory I looooove, but unfortunately, we can see Arya in the preview of the next episode, so I don't think it's true.

There's also a fan theory that Arya is literally the bringer of death like the grim reaper—think about that Johnny Cash song, about how Death rides a pale horse:

When Arya was in the House of Black & White, she was blinded by the Faceless Man. He then drinks the poison meant to kill Arya to die for her and therefore he ultimately strips Arya of her name in a final death. She goes to reveal his true face and sees herself. Why? Because Arya has lived many times just like her brother Bran.

Related Story
37 Saddest 'Game of Thrones' Moments of All Time

I mean, I guess? I'm not sold on the exact wording there, but it would tie in to Arya's training. Now that I'm thinking about it, Arya stands a better chance of killing Dany than Jon—my theory is that Dany doesn't trust anyone at this point so she'd see Jon's betrayal coming a mile away. But I'm really, really hoping that we don't end all of Game of Thrones with a tyrannical Mad Queen ruler, so I guess I like this Arya-kills-Dany theory, sort of.

TBH, I don't know what's about to happen. But I don't like it. 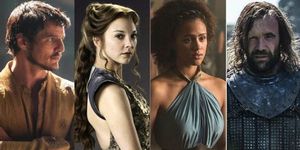 21 'Game of Thrones' Stars with Surprising Pasts
14 Gifts for the 'Game of Thrones' Fanatic
This content is created and maintained by a third party, and imported onto this page to help users provide their email addresses. You may be able to find more information about this and similar content at piano.io
Advertisement - Continue Reading Below
More From Culture
'Bachelor In Paradise' 2021: Everything We Know
Hang On, What's "ROC" at the Olympics?
Advertisement - Continue Reading Below
Obsessed With the Olympics? Read These Books
The 'Friends' Cast Just Dropped Iconic Merch
Twitter Is Obsessed With Greg on 'Bachelorette'
You're About to Hear a Lot About Athing Mu
Meet the Cast of Katie's 'Bachelorette' Season
Blake Moynes Has a Thing For 'Bachelorette' Leads
'Skye Falling' Should Be on Your Summer TBR List
What Makes an Olympic Moment?