I'm not going to lie, I'm starting to feel like my Father's Day gift to my beloved dad was inadequate. Back in June, Twitter user KB Strawder Jr. posted a thoroughly adorable clip of him and his brother surprising their dad with tickets to see one Janet Jackson, icon, in Las Vegas. And it looks like Ms. Jackson saw the clip: After the show, she surprised him with a hug, captured in a video that has over 200,000 likes on Twitter and counting. Wow, I've really got to do better with my dad's next gift.

In KB's first video, he presents his unsuspecting dad (not named in the video) with an average looking sheet of paper, which happens to feature tickets to see Janet at her Las Vegas residency. His dad's reaction is an absolute delight: He leaps from the couch and runs across the room, exclaiming, "Oh my goodness!" Again, and I don't mean to shame you here—has any gift you've ever given your relatives received a reaction like that?

Remember my dads reaction on Father’s Day to him finding out he was going to see @JanetJackson show in Las Vegas?....well we went to the show and there was one more surprise. pic.twitter.com/NjMAQOMWkN

The second clip, filmed after the show, is even sweeter: KB's dad talks to someone off camera, describing his favorite part of the concert. ("Right at the beginning, when she came down," he said. "That was a highlight for me, just seeing her on stage.") Unbeknownst to him, Janet is standing behind him the whole time; she hugs him and telling him, "That's really sweet," eliciting an enormous gasp. And if you need to pause the video right there, just to take in the expression on his face, you're not alone: Multiple Twitter users took a screenshot.

Janet and her number one fan go on to have a conversation in the video clip, though it's hard to hear exactly what they talk about. Let's just say the Best Sons of 2019 prize has already been awarded to the Strawder brothers—and the rest of us really need to step it up. 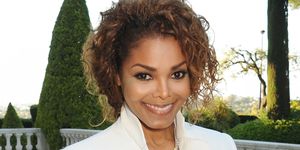 Janet Jackson Gave Her Baby an Unusual Name
Emily Dixon Emily Dixon is a British journalist who’s contributed to CNN, Teen Vogue, Time, Glamour, The Guardian, Wonderland, The Big Roundtable, Bust, and more, on everything from mental health to fashion to political activism to feminist zine collectives.
This content is created and maintained by a third party, and imported onto this page to help users provide their email addresses. You may be able to find more information about this and similar content at piano.io
Advertisement - Continue Reading Below
More From Celebrity
Alicia Silverstone Got Banned From a Dating App
The Queen Just "Reluctantly" Canceled a Trip
Advertisement - Continue Reading Below
Adele's Album Will Feature a Sensitive Voicemail
Selena Gomez Just Debuted a Sleek Bob
Zendaya Looked Incredible at the 'Dune' Premiere
Kate Middleton Is Helping Tackle Addiction
The Queen Was Advised to Stop Drinking for Now
Scott Disick Is "Not Happy" for Kourt and Travis
Emma Watson Stunned at the Earthshot Prize
Kate "Didn't Have Much Energy to Bond" With Meghan