I have missed Missy Elliott so much. She's responsible for at least one of my top five favorite songs of all time, and her unmatchable energy feels thoroughly unique. Last night, she announced she'd be dropping a five-track album (her first in 14 years) called Iconology at midnight, saying of the project, "Let’s #ThrowItBack to a time when music just felt good and made us want to dance!" No surprise, Iconology has already hit the top five on U.S. iTunes. One of those songs, "Throw It Back," came with its own music video. And it's a complete return to form for the icon.

Allow me to summarize. The singer shows a sly self-awareness that I love—her video starts with a tween not knowing who "Missy Elliott" is—and the video is, no surprise, about her throwing it back to her iconic style with a glorious new spin. "Made songs for Tweet before y'all could even Tweet" is an actual lyric for the song that made me legitimately laugh out loud.

She has her dancers in every color of the rainbow (she's in matching lipstick, natch). The exuberant, powerful dance moves are very reminiscent of "Get Ur Freak On," which I was obsessed with. At one point, they jump rope on her braids. At one point they all dance in space suits on the moon. By that point I might have been choked up, #notsorry. There are little Easter eggs throughout the video, as Missy explained: instead of pom poms, her dancers used dyed afros:

Lastly I know you see something new everytime you watch a video bet ya thought those were Pom Pom’s in the cheerleaders hands but those are dyed AFROS!Straight snapping🔥 #ThrowItBack Video stream 4 new songs that SLAP from my #Iconology collection! DripDemeanor that shiii too🔥 pic.twitter.com/Yqgc9jL45G

I'm sure I missed about 20 references, which is why I have to go back and watch it 10 more times. Not only is she back, but she's somehow even better, which I didn't know was possible. It's an amazing time for the singer: "On May 11, Elliott received her doctorate in music. On June 13, she became the first female hip-hop artist inducted into the Songwriters Hall of Fame. On July 1, she turned 48. Her legacy is undeniable, and her will to keep making music is unstoppable," according to a feature with Marie Claire. So this is just the first stop of hopefully many.

.@MissyElliott is STILL ahead of her time. This whole #ICONOLOGY project pic.twitter.com/K4mz0Wa0FS

Really, you should just watch the whole thing. 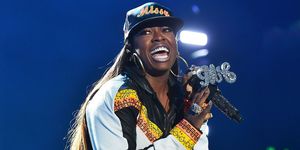 A New Missy Elliott Song to Get You Excited
Katherine J Igoe Katherine’s a Boston-based contributing editor at Marie Claire online who covers celebrity, fashion, entertainment, and lifestyle—from “The Bachelor” to Everlane to Meghan Markle.
Advertisement - Continue Reading Below
More From Celebrity
Dolly Parton Will Read You a Bedtime Story
Prince Harry and Meghan Markle's 53 Cutest Moments
Advertisement - Continue Reading Below
RiRi Was Shocked by the Reaction to Fenty Beauty
Behold: Celebrities Who Dated Normals
Kate Middleton & Michelle Obama Use This $64 Cream
A Full Timeline of Tyler C. & Hannah B.
Blake and Ryan Donate $400K to NY Hospitals
Prince William May Work as an Air Ambulance Pilot
Harry Is Likely to Get U.S. Diplomatic Status
Harry Was Forced to Give Up His Military Titles