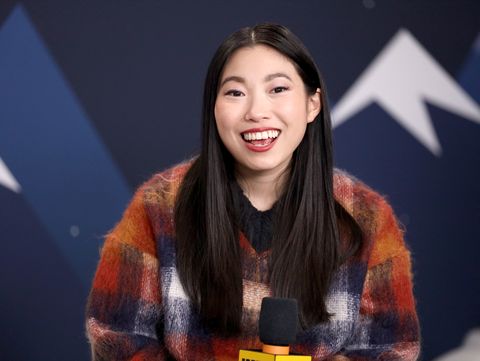 Get ready for one more reason to be hyped for Disney's upcoming live-action Little Mermaid reboot because Awkwafina might be in the movie.

Rumors that the rapper and actress would be in the highly-anticipated remake have been swirling for a while now. When she was asked about it directly at the D23 Expo in Anaheim, California this weekend, Awkwafina was cryptic—but her response did seem to confirm that she's at least in talks for a role.

"Aww man, that all isn't confirmed yet, but obviously if it happens, I would be more than honored," Awkwafina told ET Online. "It's a classic, yeah. I'm very, very happy. That's my princess right there, so I'm very happy with what they have [announced] so far."

The adaptation, which will star Halle Bailey as Ariel, still doesn't have a firm release date, but we're more and more excited the more we hear about it.

Related Stories
Harry Styles Won't Star in 'The Little Mermaid'
The Most Exciting Movies That Came Out In 2019
Kayleigh Roberts Contributor Kayleigh Roberts is the weekend editor at Marie Claire, covering celebrity and entertainment news, from actual royals like Kate Middleton and Meghan Markle to Hollywood royalty, like Katie Holmes and Chrissy Teigen.
This content is created and maintained by a third party, and imported onto this page to help users provide their email addresses. You may be able to find more information about this and similar content at piano.io
Advertisement - Continue Reading Below
More From Celebrity
Will & Kate Are Nervous About George's Future
George Won't Be Forced to Go to Boarding School
Advertisement - Continue Reading Below
Diana Would Have Written a Memoir Too, Friend Says
A Slice of Diana's Actual Wedding Cake Is For Sale
Matt Damon Trolled Ben Affleck and Jennifer Lopez
This Old Video of the Queen Saying "Nah" Is LOL
Diana Had a Secret Message on Her Wedding Shoes
Will's Friends Made "Jibes" About Kate's Mom
William Will Suffer "Worst" from Harry's Memoir
Simone's Boyfriend Sent Her the Sweetest Message