Kristen Bell and Dax Shepard are notoriously protective of their daughters, Lincoln, 6, and Delta, 5, but this weekend, the actress gave fans a rare peek into her and Shepard's parenting style.

In a series of Instagram Story videos on Friday, Bell revealed her (hilarious) reactions to a conversation between Shepard and one of their daughters about cursing and using the middle finger.

In the video (which, for the record, was filmed in a public space), their daughter tells her dad about a kid at school who uses the middle finger constantly. Here's how the conversation (which Bell could hardly contain her laughter during) went down:

Daughter: "He says this is 'f*ck. He says that every time in school."

Shepard: "Yeah, that's not a nice word. You know, that that's a naughty finger and I never see you do that. It makes me so proud that you know that, yet you don't do it. Well you did it a couple of times when you were young, before you knew it was a naughty word.

"One time you couldn't get a shirt on in your bedroom and you let it fly. Then later that day, you were in the swimming pool and you let one fly. But since then you've really curbed it."

Daughter: "You guys didn't tell me 'f*ck' was a bad word when I was little."

Shepard: "You're right, we just ignored it. We hoped that you didn't say it a lot, which seemed to work."

A fan account posted the video, which you can watch below:

"I have been waiting for this conversation since the day I got pregnant," Bell wrote on the video. "The one where we talk about what fingers mean what when u hold em up. I [am] fidgeting because I am trying so hard not to laugh. It's excruciating. @daxshepard you handled this brilliantly."

Related Stories
12 Moments in ‘Frozen 2’ That Are Subtly NSFW 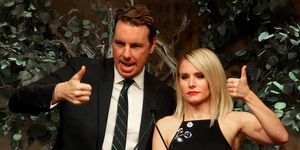 Dax Shepard Once Broke Up With Kristen Bell
Kayleigh Roberts Contributor Kayleigh Roberts is the weekend editor at Marie Claire, covering celebrity and entertainment news, from actual royals like Kate Middleton and Meghan Markle to Hollywood royalty, like Katie Holmes and Chrissy Teigen.
This content is created and maintained by a third party, and imported onto this page to help users provide their email addresses. You may be able to find more information about this and similar content at piano.io
Advertisement - Continue Reading Below
More From Celebrity
Ariana Grande Got Married Over the Weekend
Ariana Grande Quietly Married Dalton Gomez
Advertisement - Continue Reading Below
Joie de Tracee
Jennifer Lopez and Ben Affleck: Everything We Know
Harry & Oprah's Mental Health Doc Has a Title
Serena Williams Might Miss the Tokyo Olympics
Jennifer and Ben Have "Unreal" Chemistry Together
The Sussexes Marked Archie's Bday in a Lovely Way
Queen's Cousin Accused of Selling Access to Putin
Meghan Wore a Meaningful Necklace for Vax Live