Today's Top Stories
1
Inside Chrissy Teigen and John Legend’s Home
2
Stock Up on Spring Essentials at Nordstrom's Sale
3
The Very Best Rom-Coms of All Time, Ranked
4
I Get So Many Compliments on This Velvet Coat
5
Read an Excerpt From the Uber Whistleblower's Book
Andreas RentzGetty Images

Lana Del Rey is known for making music that tugs at the heartstrings. She also single-handedly started the flower crown back in 2012, and don't even get me started on her impact to the winged eyeliner movement. Naturally, like other all fans of Ms. Elizabeth Woolridge Grant (her real name if you're new here), we're interested in knowing who has inspired the tales of love that have become the lyrics to her most beloved sad (and sometimes happy) songs.

At the 62nd Grammys this year, Del Rey is nominated for Album of the Year and Song of the Year for "Norman F***ing Rockwell!" and it's well deserved. But no matter if she walks away with the award or not, she'll be able to share the moment with her Instagram-confirmed (!) 46-year-old boyfriend, Sean "Sticks" Larkin. Since discussing their relationship back in October in an interview with the Los Angeles Times, the couple has been seen all over.

Sean is on a reality TV show about cops.

Another new episode of LivePD Presents: PD Cam is on tonight at 10 EST/9 Central! Tune in to A&E TV tonight and watch the job as it’s seen from the perspective of law enforcement officers from around the county. #tulsa #livepd #pdcam #tv #officer #deputy #trooper

Yes, you read that correctly. His Instagram profile may read "full-time popo," but when he's not serving as a police officer in Tulsa, Oklahoma he's an analyst on A&E's Live PD and the host of A&E's show Live PD Presents PD CAM.

On the show, he gives "explanations on what officers are doing, why they are doing it, as well as policies and procedures and law." When asked about how fans might react to her dating a cop, Del Rey has said, "Well, the thing is, he's a good cop. He gets it. He sees both sides of things."

He has two children.

Larkin may not have a dad bod by any means (he's really into CrossFit, and we can tell!), but he does have two kids. He's posted heartwarming posts dedicated to his 22-year-old daughter and teenage son.

Happy 20th Birthday 🎂 to my not so baby girl @lyssa_larkin today! Looking at these 5 pics it's hard to believe how she went from that cute little baby to this beautiful, smart, amazing and sweet young woman (watch out for her driving though) so fast. #birthday #prouddad

My mini-me looked so damn good for his 9th grade formal this weekend! Not only is my 14 year old son smart (and sarcastic as hell) but he pulls off a tux as if he is the next James Bond. Love this boy! #minime #prouddad #tuxedo #rayban #formal

As for what they think of their dad dating one of music's biggest names, let's just say this: When photos of them first leaked online, his daughter took it to Twitter to let everyone know how she really felt. Because, naturally, if your father was seen out with Lana Del Rey, there is no better time to flex that Del Rey could potentially be a guest at your next family dinner.

My dad hung out with Lana Del Rey in NYC and I can’t even get a text back :/ https://t.co/6ExsTNia47

While Ms. Del Rey isn't a big poster when it comes to social media, she made her and her new beau Instagram official when she posted a photo of in December. The picture featured Larkin kissing the "Born to Die" singer on the head while backstage at one of her concerts.

The pair were photographed out and about in September while strolling through Central Park. In the interview with the Los Angeles Times, Rey explained she didn't know they were spotted together at the time. "I didn't know we were being photographed. I would've worn something different," she joked.

And move over A.Rod—Larkin knows what it takes when it comes to posing for the 'gram. The basic requirements include: a good smile (have you seen those pearly whites?), understanding the importance of great lighting, and be willing to drop whatever you're doing to strike a pose. And voilà, you're set to post! 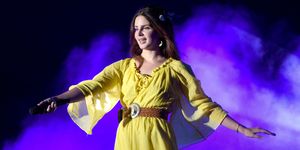 Yes, Lana Del Rey *Did* Cast a Spell on Trump
Play These Sad Songs When You're Feeling Down
Bianca Rodriguez Bianca Rodriguez is the digital fellow at Marie Claire, where she covers all your favorite podcasts, Netflix shows, and celebrities ranging from Rihanna to Harry Styles.
Advertisement - Continue Reading Below
More From The Grammys 2020
How to Get Demi Lovato's Look From the Grammys
Go Bold or Go Home Was the Grammys' Nail Vibe
Advertisement - Continue Reading Below
Why Isn't Beyonce at the 2020 Grammys?
Watch Demi Lovato's Emotional Grammys Performance
Alicia Keys' No-Makeup Look at the Grammys Is Gorg
Alicia Keys Covers 'Someone You Loved'
Priyanka Chopra Pays Tribute to Kobe at Grammys
Lizzo Opens the Grammys With an Epic Performance
Sophie Turner Stuns In a Gothic Look
Ariana Grande Is a Disney Princess at the Grammys