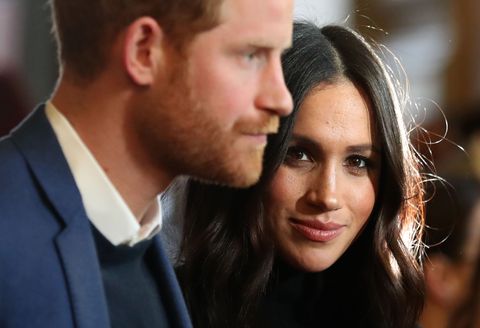 Every fan (or foe) of the royals wants to know what really goes on behind palace doors. Thankfully a must-read new article in The New Yorker about Prince Harry and Meghan Markle did just that, diving deep into their now-notorious separation from their senior royal titles. One of the most interesting tidbits from the article was the exploration of the relationship between Markle and the Buckingham Palace staff; the latter were described as "less enamored of the very qualities that made her irresistible to the press: her showbiz lustre, self-confidence, and feminist habits of assertion." Before the wedding, according to the article, Meghan had been considered "imperious" by staff.

According to Camilla Tominey, an editor at the Daily Telegraph who had covered the royal family for more than a decade when Markle arrived at the Palace, she wasn't well received. Tominey explained it had to do with the clashing of cultures: Markle and the Palace were operating on two very different speeds. "She had come from the celebrity world, which is very fast-paced and quite demanding," said Tominey. "The royal world is very different—it's much slower-paced and hugely hierarchical. In the royal world, it's 'What should we do next?' 'Well, what did we do last time?'"

Tominey continued: "It's a bit like Downton Abbey—there's a hierarchy of staff who have been at Buckingham Palace for years and years, to serve Queen and country," she said. "And, therefore, for Harry and Meghan to be making demands, there was a bit of below-stairs chatter, particularly with the Duchess, that was 'Well, hang on a minute, who do you think you are?'"

That said, Meghan and Harry appeared to have a great relationship with their Frogmore Cottage staff, bidding them goodbye with a teary goodbye lunch. Hopefully, there are no hard feelings, especially now that they're spending their days in sunny L.A. as a family with Archie.

Related Stories
Every Single Royal Family Member's Net Worth
Meghan and Harry's NonprofIt Website Was Trolled
Bianca Rodriguez Bianca Rodriguez is the digital fellow at Marie Claire, where she covers all your favorite podcasts, Netflix shows, and celebrities ranging from Rihanna to Harry Styles.
This content is created and maintained by a third party, and imported onto this page to help users provide their email addresses. You may be able to find more information about this and similar content at piano.io
Advertisement - Continue Reading Below
More From The Ultimate Guide to the Royal Family
Comparing the Two Biggest Royal Weddings
How the Queen Ends Awkwardly-Long Handshakes
Advertisement - Continue Reading Below
The Queen Has a Rule Against Bad Talking Family
The Queen Took a Pic of Philip With Her to Funeral
The Queen's Tolerance Was the Key to Her Marriage
Will & Kate Welcomed Harry Back Into Their Group
Queen Left a Handwritten Note on Philip's Coffin
The Queen Said Grief Is the Price We Pay for Love
All of the Photos from Prince Philip's Funeral
The Queen Wore This Brooch to Philip's Funeral