Today's Top Stories
1
Could This Be the Last Year of Roe v. Wade?
2
What to Buy From Madewell's Secret Stock Sale
3
The Inaugural Concert Was a Cheesy Balm
4
Jaclyn Rothenberg Pursues Pantsuits In Every Color
5
Listen to the Best New Love Songs of 2021 (So Far)
Kevin WinterGetty Images

Here is a startling image to jolt you awake of a Tuesday morning: A new photo has been released of Tom Hardy as an ailing Al Capone, ahead of the May 12 release of biopic Capone (a surprising title!) And he looks...unsettling! As captured by photographer Greg Williams, Hardy-as-Capone sports extensive facial scarring, dramatically bloodshot eyes, and a receded hairline—the work of makeup artist Audrey Doyle. Drink it in below:

Capone, directed by Josh Trank, will be available for at-home rental from May 12, Variety reports, after the coronavirus pandemic forced the closure of movie theaters (a theatrical release is still on the cards once theaters reopen). It's a fresh take on the mob boss: The movie will focus primarily on Capone's later years in his Palm Island, Florida mansion, as he suffered from dementia after his release from prison, rather than his time as head of the Chicago Mafia. Hardy says little in the trailer, and rarely appears without a very large cigar wedged between his lips.

The movie's official synopsis, according to Variety: "The 47-year old Al Capone, after 10 years in prison, starts suffering from dementia, and comes to be haunted by his violent past." Well, I'm looking forward to approximately two hours of respite from relentless, all-consuming boredom on May 12! 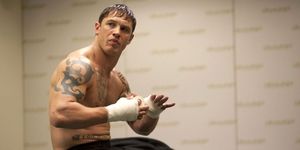 Watch Tom Hardy Getting Into Shape for 'Venom'
Emily Dixon Emily Dixon is a British journalist who’s contributed to CNN, Teen Vogue, Time, Glamour, The Guardian, Wonderland, The Big Roundtable, Bust, and more, on everything from mental health to fashion to political activism to feminist zine collectives.
This content is created and maintained by a third party, and imported onto this page to help users provide their email addresses. You may be able to find more information about this and similar content at piano.io
Advertisement - Continue Reading Below
More From Celebrity
See a Rare Portrait of Princess Diana's Mother
Kelly Ripa's Husband Left Her a NSFW Comment
Advertisement - Continue Reading Below
Jennifer Lopez on Learning to Love Herself
Diana's Wedding Interview Footage Is Telling
The Queen May Honor Kate Later This Year
Olivia Wilde & Harry Styles Keep It Profesh on Set
Prince Harry on How Tabloid Attacks Changed Him
Watch Orlando and Katy After Her Performance
Kate Middleton Debuted Long, Straight Hair
Prince Harry's Surprise Inauguration Appearance