Kim Jones' first womenswear show for Fendi haute couture during Paris Fashion Week was positively overflowing with star power, with Naomi Campbell, Demi Moore, Adwoa Aboah, Bella Hadid, and Cara Delevingne among those to walk the runway Wednesday, as British Vogue reports. Also among the models? Kate Moss and her 18-year-old daughter, Lila, making their first ever joint appearance in a fashion show. And in very unsurprising news, the duo stunned! Observe:

This is Lila's second time modeling at Paris Fashion Week: Lila made her runway debut at PFW last October, opening Miu Miu's spring/summer 2021 show. Her mom, who watched the show as part of a virtual audience due to the COVID-19 pandemic, reflected on the big moment in a December British Vogue video, commenting, "It was so emotional seeing Lila on the runway."

"Well, it wasn’t emotional—I was really nervous for her," Kate continued. "I was sitting around the kitchen table…Some girlfriends [were there] and we were, like, waiting for the show to start on the link. And when she came out we were like, 'She’s doing it! She’s doing it!' Yeah, I was really proud."

Kate also revealed her daughter has access to her enviable wardrobe: "Lila has already started dipping into my closet," the supermodel said. "She has recently stolen my Azzedine Alaïa skirt. And it's so cute." 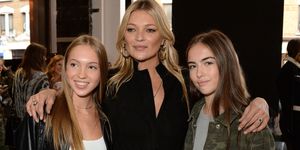 Kate Moss' Daughter Steals the Topshop Front Row
Demi Moore Walks Fendi Runway in Paris
Emily Dixon Emily Dixon is a British journalist who’s contributed to CNN, Teen Vogue, Time, Glamour, The Guardian, Wonderland, The Big Roundtable, Bust, and more, on everything from mental health to fashion to political activism to feminist zine collectives.
This content is created and maintained by a third party, and imported onto this page to help users provide their email addresses. You may be able to find more information about this and similar content at piano.io
Advertisement - Continue Reading Below
More From Celebrity
Kaley Cuoco Wore a Princess Dress to Globes
Your First Look at Harry & Meghan's Oprah Special
Advertisement - Continue Reading Below
Best Celebrity Instas from the 2021 Golden Globes
J.Lo Looks Impossibly Stunning In a White Swimsuit
What Margot Robbie Wore to the Globes
Katie Stuns in a Leather Jacket and Baggy Jeans
J.Lo Reunites with A-Rod for Some Instagram PDA
Shop Meghan's Stunning $30 Summer Dress
Duchess Kate Wears a Sleek Green Blazer
Meghan & Harry Update Archewell Website