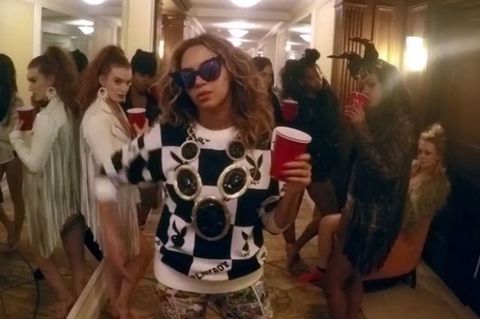 To kick off your weekend, the Queen has just released the video for her new track "7/11" and it is a glorious, underwear-filled hotel party.

Where to begin with this magic? It starts off harmless enough: There's Beyoncé on a hotel balcony in a Kale sweatshirt (it's from Sub_Urban Riot and you can buy it here for $48) and some underwear dancing around. Spinning on top of a room service lid? Beyoncé makes it look adorable.

Then the party moves inside.

There are red solo cups, fur coats, messy piles of clothes (Beyoncé is messy too!?), Blue Ivy (only for a second at :58), and some twerking that, truth be told, made me squeal. Then Beyoncé dials HER FOOT.

She drops dice on one of her backup dancer's asses.

There are airbrushed American Apparel undies that say "Smack It" and, yes, we, like you, are already contemplating how to get to a boardwalk to one of those t-shirt shops for custom Beyoncé-approved underwear.

To quote a friend who just watched this magic, "I watched it. I lived. Died. And was reborn."

Related: Beyoncé's Choreographer Teaches Us How to Move Like Bey

Related: 25 Examples of Beyoncé and Jay Z Being Perfect Together

From the editors at ELLE.com.