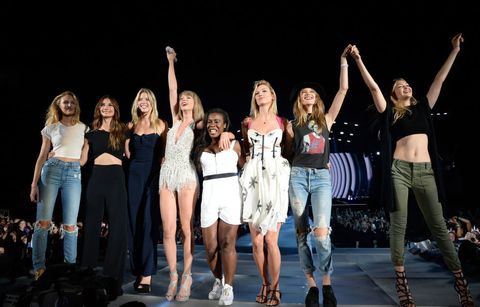 As you already know, Taylor Swift, inventor of #squadgoals, is friends with just about every celebrity there is. And as you are also probably well aware, she casually invited *all* of them to come join her on stage throughout the entirety of her 1989 World Tour.

"Getting people to say yes to come out onstage was a lot easier than I thought," she explains in her new 1989 World Tour Live film, released this weekend. "It really showed me how many artists out there love what they do so much that they are willing to get up and play because it's fun."

Still, never in her wildest dreams (sorry, had to) did she think one of her idols, Justin Timberlake, would take her up on her offer. "Of course I invited him out, but I did not expect him to say yes," she admits during a behind-the-scenes look at the rehearsal of their L.A. duet to Timberlake's "Mirrors."

While the "Blank Space" singer had to build up the courage to ask JT to make an appearance, some guest performances were planned at the very last minute. In the two-hour documentary (available now on Apple Music), she reveals that John Legend attended one of her concerts as an audience member when he and Tay decided to sing "All of Me" together—40 minutes (!!) before the show began.

No matter how each performer and/or famous person found their way on stage, Taylor is just glad that the 1989 era has been every bit the squad celebration she intended it to be.

"I feel like this tour and this album and this phase of my life have been about inclusivity. Doing it on my own, but doing it with friends," she says. "It's incredible how many performers are so gracious with their time. It made a lot of people happy."