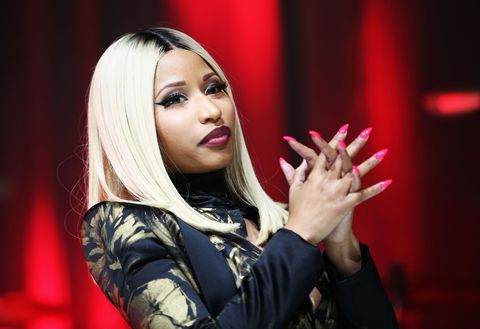 Nicki Minaj is opening up about her rumored feuds, starting with that whole messy situation with Cardi B and Migos.

During an interview with Apple Music's Beats 1 radio to promote her new music, Nicki addressed rumors that she had butt heads with Cardi B and Migos during their collaboration, "MotorSport." Even though Nicki says the beef itself is fabricated, she admitted that she still ended up feeling hurt by the whole situation.

"When I first came in the game, if a female of [my] stature had done a feature with me on it, I would only be singing their praises and saying thank you," she said. "The first interview [Cardi] did after 'MotorSport' came out, it just really hurt me, because she looked so aggravated and angry, and the only thing she kept saying was, 'I didn't hear that, she changed her verse.'"

When Nicki didn't appear in the song's music video, the feud rumors escalated, but Nicki explained that the reason behind her absence from the video was a simple (and innocent) scheduling conflict. She still seems a little bitter that Cardi and Migos didn't speak out in her defense at the time.

"When it was time to clear the air about that, no one did that," she said. "All of them allowed me to look like I lied."

What's more, Nicki thinks Cardi should have been pretty psyched just to be doing a song with Nicki Minaj. Not an exaggeration, check out the quote:

"Up until this recent interview that [Cardi B] did, I had never seen her show me genuine love," she said. "I could just imagine how many girls wish they could have been on a song with Nicki Minaj. I'm not saying it in a cocky way ... It's because of the Nicki hate train that she felt like she could speak about me in that manner."

This content is imported from YouTube. You may be able to find the same content in another format, or you may be able to find more information, at their web site.
Kayleigh Roberts Contributor Kayleigh Roberts is the weekend editor at Marie Claire, covering celebrity and entertainment news, from actual royals like Kate Middleton and Meghan Markle to Hollywood royalty, like Katie Holmes and Chrissy Teigen.
This content is created and maintained by a third party, and imported onto this page to help users provide their email addresses. You may be able to find more information about this and similar content at piano.io
Advertisement - Continue Reading Below
More From Music
Princess Diana's Butler Talks 'The Crown'
Reese & Ryan's Son, Deacon, Drops His First Single
Advertisement - Continue Reading Below
Life Advice From an Icon, Cher
J.Lo Is Basically Naked on Her New Single Cover
Karaoke Songs Anyone (Yes, Anyone) Can Rock
Um, This Dude Claims Lady Gaga Stole “Shallow”
Sad Taylor Swift Is the Best Taylor Swift
Jennifer Lopez's NYC Concert Was Evacuated
Miley Cyrus Channels Britney Spears' Iconic Look
Ginger Spice Apologizes for Leaving Spice Girls