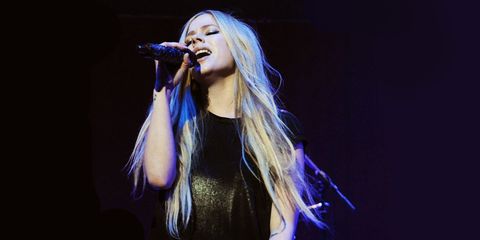 Update, 6/29: It's been two months since we learned Avril Lavigne's been suffering through Lyme disease, and for the first time on camera with Good Morning America, the singer opens up about her terrifying ordeal. Watch Lavigne's emotional interview as she discusses her "second shot of life" and how her fans inspired her to keep fighting:

Original, 4/1: A simple bug bite left Avril Lavigne sick in bed for five months, unable to talk or move. After initially keeping it under wraps, the singer has told People magazine that she's been suffering from a severe case of Lyme disease.

Lavigne started feeling awful last year, and her doctors were stumped. During her 30th birthday party, she had to go lay down in bed because she felt so weak. Finally, a doctor told her she had Lyme disease, which she thinks she contracted from a tick bite earlier last year.

"I had no idea a bug bite could do this," she told the magazine. "I felt like I couldn't breathe, I couldn't talk and I couldn't move. I thought I was dying."

Fans had been wondering why Lavigne was suddenly MIA, and a direct message to a fan on Twitter about her "health issues" went viral. She even told fans to #PrayForAvril back in December. After months of recovery, Lavigne is feeling "80 percent better' and is working on new music.

Lavigne's case was rare—the Centers for Disease Control and Prevention says that most cases of Lyme disease can be treated with a few weeks of antibiotics. Just be sure to check yourself for ticks when you go out on your spring hikes, okay?

When Plucking Your Eyebrows Becomes a Life-Changing Disorder

Why We Cry in Spin Class

How Your Body Changes When You Switch Birth Control