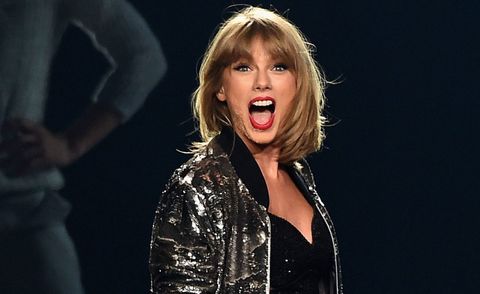 Taylor Swift fans have been spoiled. Since 2006, the singer-songwriter has being gifting us with a new album every two years like clockwork. But, after she released her mega-hit 1989, Swift announced her plans to take a break from music.

And don't think that NME interview was just an off day for Swift; she's echoed that "I need a break" sentiment time and again, leaving us all fully prepped for a Swift-less October 2016. Because, in case you weren't keeping up with the math, October 2016 is when the world would have been due for a new Taylor Swift album.

Especially after summer came and went without a new single (Swift always releases a summer single before the big October album drop), we had just accepted that we'd have to wait more than two years for Swift's next album. But now, thanks to Emily Yahr at The Washington Post, we feel a little glimmer of hope.

Yahr has looked at all of the clues and issued an official prediction that Swift will drop a surprise album on October 23, 2016—as in just over two weeks from now. The prediction takes into account a lot of big Swift-isms.

Here's the relevant evidence: Four of her five albums have been dropped in October. October 23 will be the eve of the 10-year anniversary of her debut album—and Taylor loves milestones. And, perhaps biggest of all, all of the numbers in that date (1+0+2+3+1+6) add up to 13, aka Swift's famously lucky number.

Is it certain that Taylor Swift will drop an album this month? No, of course not. Will we be disappointed if she doesn't? No. Swift has said she needs a break and, after 10 straight years of constant work, we totally get it. But will we lose our minds with excitement and buy the album immediately if she does surprise the world with a new release? Yes, yes, a million times yes.