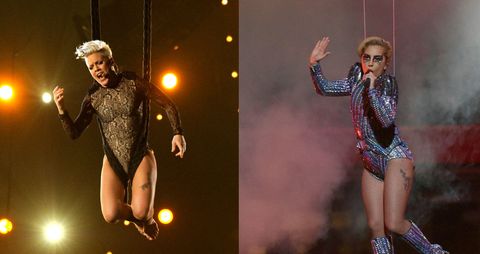 Lady Gaga wowed audiences in Houston Sunday night by "jumping" off the roof of the Super Bowl stadium, then singing while being lowered to the ground in a high-flying aerial act. But some fans pointed out that another pop star has done that sort of thing before. Pink often performs while suspended in the air, and makes it look ridiculously easy. Check out her performance at the Grammys in 2010—the good stuff starts at about two minutes in.

So it's not a surprise that some Pink fans noticed the comparison during the Super Bowl halftime show and weren't too happy.

"For the record: Let's squash this before it even has a chance to be a thing…Lady Gaga killed it yesterday. Her voice was powerful and beautiful, her outfits were on point, choreography stellar, her heart was in it and she sang about love and inclusiveness, all in front of millions and millions of people. Let's celebrate a woman who has the guts to jump off a roof and stand up there in the first place. Who cares if I flew first? Cause I didn't! Cirque [du Soleil] and Peter Pan been in the air for years! Now can we get back to the real controversy? The one where our so-called leader is stripping our humanity away minute by minute…"

And that's a message we all can agree on. Frankly, any pop star who doesn't perform suspended from the ceiling is just slacking at this point, anyway.