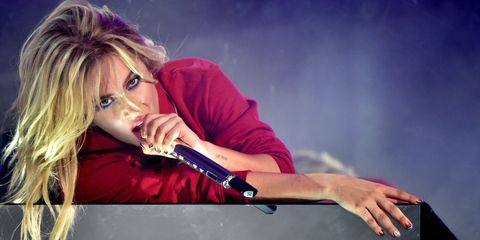 Lady Gaga's Coachella show was nothing less than fans have come to expect: major. On top of performing her biggest hits, the singer debuted new single "The Cure," much to the delight of the crowd, and then released the song to the public immediately after.

"The Cure" is a synth-pop masterpiece that will be stuck in your head from the second you hear it. The lyrics are super uplifting and relatable, especially with a chorus like: "No matter what you know, I'll fix you with my love."

According to Rolling Stone, Lady Gaga told the Coachella crowd that she's been back in the studio recording new music. It's unclear right now whether a follow-up to Joanne is on the way already, or if the singer might re-release her fifth album with additional tracks. Either way, we'll take it.

"The Cure" is out now, so you can listen to it on repeat until your friends and family know all of the words, or are totally sick of you.

Amy Mackelden Weekend Editor Amy Mackelden is the Weekend Editor at HarpersBAZAAR.com, where she writes about entertainment, celebrity news, beauty, and fashion.
This content is created and maintained by a third party, and imported onto this page to help users provide their email addresses. You may be able to find more information about this and similar content at piano.io
Advertisement - Continue Reading Below
More From Guide to Coachella 2020
Kylie Jenner's Adorned Braid for Coachella
How to Watch Coachella 2019 Live
Advertisement - Continue Reading Below
Why Solange Isn't Performing at Coachella Anymore
The Best Street Style From Coachella 2018
All the Celebrities at Coachella This Year
The 5 Coolest Beauty Trends at Coachella
How to Create Coachella Braids in Four Easy Steps
Rihanna Looks Unrecognizable at Coachella
Leonardo DiCaprio Saw Coachella in 3D
Kylie Jenner Debuts Denim Blue Coachella Hair