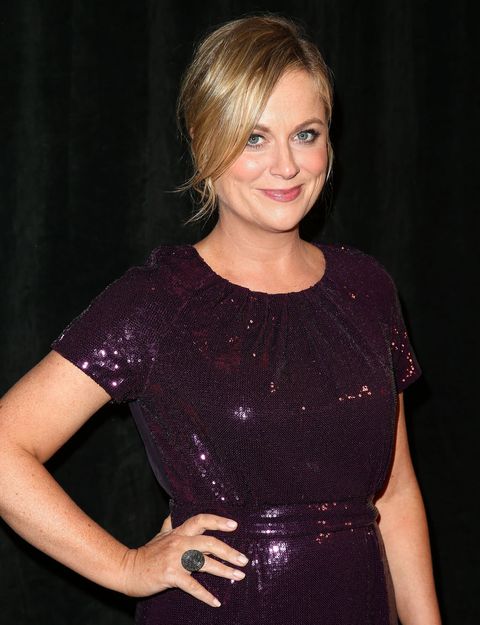 2015 is already shaping up to be a great year for Amy Poehler. Parks and Rec is celebrating its final season, and she's rejoining Tina Fey as host of the Golden Globes this weekend (check back Sunday for coverage!). And now, the most prestigious university in America is literally going to have a parade in her honor.

Hasty Pudding Theatricals, the oldest theater group in the United States, has named her its 2015 Woman of the Year. On January 29, festivities will begin for Poehler with a parade through the streets of Cambridge, followed by a roast; she'll then get a commemorative "pudding pot" in Harvard Square. Last year, Dame Helen Mirren twerked on stage to accept her prize, so Poehler better bring it.

It makes sense for Harvard students to look up to Poehler. She's not only a hilarious actress and author, but she's also the founder of the influential improv theater Upright Citizens Brigade. "She is an accomplished performer, incredible comedian, and an inspiration to everyone in the Hasty Pudding," the group's president, Jason Hellerstein, said in a statement.

Leslie Knope would be proud.

This content is created and maintained by a third party, and imported onto this page to help users provide their email addresses. You may be able to find more information about this and similar content at piano.io
Advertisement - Continue Reading Below
More From Celebrity
Megan Thee Stallion’s Hottie Bootcamp Is Intense
Katie Holmes' Mango Puffer Coat is a Winter Staple
Advertisement - Continue Reading Below
Kate Rewore Her Favorite Festive Tartan Dress
Kate and Charlotte Hunt for Spiders Together
Princess Diana's Nieces Opened Up About Their Aunt
Elizabeth Hurley, 55, Shows Off Toned Abs On Insta
Keira Knightley Won't Do Nude Scenes Filmed by Men
Kourtney Kardashian Is Dating Travis Barker
Priyanka Chopra Jonas Talks Her New Memoir
Priyanka and Nick on Their Quarantine Quality Time