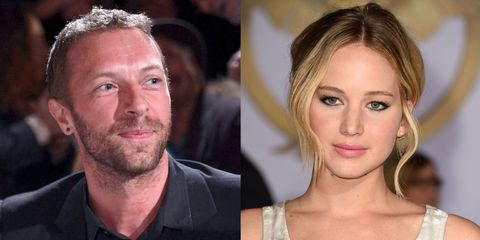 Update, 7/6: Like free, vaguely romantic spirits unbound by corporeal forms, Jennifer Lawrence and Chris Martin have gone outside again without anybody but this dude seeing them.

Just saw Jennifer Lawrence and the dude from Coldplay riding their bikes lol!

LOL NO. Where's the pic, Nick? You got one of David Blaine but not them? Thanks for nothing.

Other sources tell People the "couple" was "spotted" in New York City this weekend speed-walking arm in arm and riding bikes (on different days, obviously). Perhaps Chris Martin simply feels safer crossing the street when his friends who happen to be women guide him? That would explain so much.

Update, 7/1: No one can be positive Jennifer "I Make More Than My Male Costar" Lawrence and Chris Martin were ever anything more than buddies who occasionally enjoy California rolls together, but sure, Us Weekly—they broke up again. Let's go with that.

According to the publication, Chennifer (duration: one year) has gone the way of Charlize Theron and Sean Penn, meaning she level-90 ghosted him. "Jen has been working nonstop and they never saw each other," a source said.

Since Breakup Deux, Martin has maybe-rebounded with Kylie Minogue, while Lawrence has reportedly found solace in the arms of her ex Nicholas Hoult, with whom she took this amicable selfie.

I want to feel feelings about this, but nothing's coming.

Original post, 2/3: Are Jennifer Lawrence and Chris Martin ninjas? Because there have been an awful lot of rumors about them dating and breaking up but only one photo of them that could qualify as even remotely couple-y. (We like to call it Sushi in Studio City.)

Alas, this latest Chennifer news is also devoid of photographic evidence, though JustJared swears it really did happen. Apparently, the actress and the divorcé celebrated Harry Styles's 21st birthday in L.A. over the weekend along with a random assortment of celebrities, including Kendall Jenner, Cara Delevingne, David Beckham, Rashida Jones, Kelly Osbourne, and Zach Braff.

With so many famous people in the vicinity, there were bound to be some pics, right? Not when you're masters of stealth and deception, there aren't.