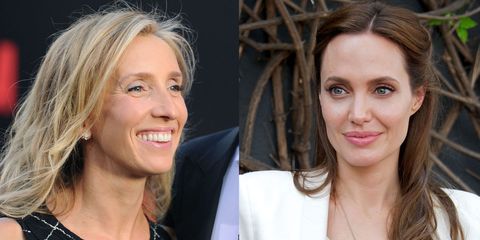 In the latest issue of Porter magazine—covered by a very vernal-looking Natalia Vodianova wearing the world's prettiest lip stain—director Sam Taylor-Johnson says Angelina Jolie, who was reportedly also in the running for the Fifty Shades gig, is a very gracious lady.

"I got an email out of the blue from her saying good luck on your journey," Taylor-Johnson says. "I thought that was incredibly sweet of her."

Rumor has it the charm school graduate expressed interest in acting in the film adaptation of E L James's hit book too, so maaaybe Taylor-Johnson was moved enough to offer her a part? Maybe it's the best-kept secret of the decade, and we'll all be pleasantly surprised on Feb. 13? (Please, please, please, please.)

On a not-so-warm-and-fuzzy note, Taylor-Johnson says she and James butted heads over the creative direction of the movie.

"We would have proper on-set barneys, and I'm not confrontational, but it was about finding a way between the two of us, satisfying her vision of what she'd written as well as my need to visualize this person on screen but, you know, we got there."

So everything is still cool, because even though making Fifty Shades wasn't all together-forever buddy-buddy-ness, we've got two strong-minded women resolving their differences to make a bunch of other women very, very happy. That's a win in our book.