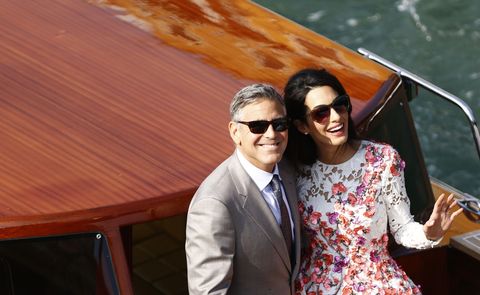 Update, 9/9: Without even a charity event to promote, George Clooney wandered aimlessly onto the set of Stephen Colbert's first Late Show, where he answered a Very Pressing Question: "What is it like to be the arm candy in a relationship?"

"[Amal] must say, like, 'We're going to meet extremely intelligent people tonight–these are not show folk. Just be shiny and pretty," Colbert said. "That's mostly what I do," Clooney agreed, nodding.

Then, to make things easier on poor, project-less George, they invented an espionage thriller titled Decision Strike, in which he plays a bomb-diffusing, own-stunt-doing U.N. Secretary-General. Watch the clips here.

Original story, 3/4: At a recent benefit celebrating Paul Newman's philanthropic legacy, George Clooney brought up Amal again, because, as a man clearly besotted with his wife, this is what he does.

While he was delivering a speech about Newman's SeriousFun Children's Network, Clooney had one of those thoughts you have in the shower—except he had it in front of celebrities such as Meryl Streep, Tom Hanks, and David Letterman.

"Since 1988, these camps have [helped] over a half million sick kids and their families from over five, from over 50, not just 500 countries... that would be too many. There aren't that many...Are there 500 countries?" Clooney said, looking confused. "My wife's the smart one."

Amal wasn't there that night, but if she were, she probably would've been like, "Oh, George" with a wave of her elegant, white-gloved hand. Then, on the way home to the Downton Abbey-ish mansion they share, she would have patiently explained that there are 195 or 196 countries in the world, depending on your views on Taiwan.

Related Story
Amal Looks Good in Every Color, Including Teal
Chelsea Peng I'm Chelsea Peng, the assistant editor at MarieClaire.com.
This content is created and maintained by a third party, and imported onto this page to help users provide their email addresses. You may be able to find more information about this and similar content at piano.io
Advertisement - Continue Reading Below
More From Celebrity
Marvelous Women Scarlett Johansson & Florence Pugh
Gigi Shares Glimpse at Baby's Wardrobe
Advertisement - Continue Reading Below
Matthew McConaughey and His Son Are Twinning
Ashley Graham Opened Up About Sex After Childbirth
Brad Pitt and Nicole Poturalski Have Broken Up
Chrissy Teigen Shared a Sweet Video With Luna
EmRata Displayed Her Bump in an Open Button-Down
Harry Sent a Legal Warning Over "False" Article
Chrissy Teigen Talked About Her Baby Loss Photos
Chrissy Teigen Opens Up About Her Loss