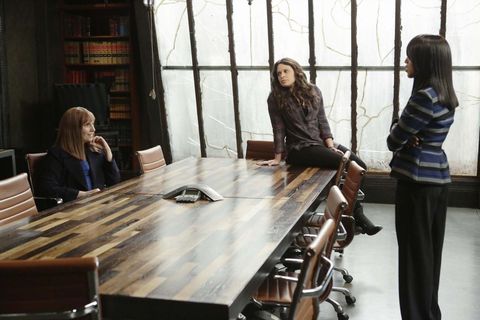 So just who is Kinky Sue? Well, she's Lena Dunham in a red, pigtailed wig, an Olivia Pope fangirl, and the writer of a tell-all that exposes her idol's sex secrets. You really have to feel bad for her for picking a fight with O.P. of all people, but if she hadn't, we wouldn't have gotten to see Kerry Washington spit out the line "I will destroy YOU. I always get it done." Watch the teaser below.

Original post, 3/10: Lena Dunham is headed to DC. The Girls star just wrapped up production as a guest star on Scandal, and you can officially call her a Gladiator.

"Shonda [Rhimes] gave us these backpacks that said like, 'Now, you're a Gladiator, too,'" she told E!. "Now we have Scandal calendars, Scandal notepads. I gave my dad the Scandal soundtrack because he really wanted it."

The actress will be playing a woman named Kinky Sue in an upcoming episode called "It's Good to be Kink." Donning a red wig, Dunham snapped a selfie with star Kerry Washington, whom she has big, Brooklyn-sized plans for.

"We want her to play something deeply different than what we've seen before because another fact about Kerry is, she's really funny," Dunham said about trying to snag Washington for a guest-starring role on Girls. "You can see it when she hosts SNL…She's been in a Wayans Brothers movie. I want to Kerry to let her freak flag fly...Her work as Olivia is so beautiful and strong and contained so we need to let her do something just goofy."

All we can say is, we're definitely on board for this.

Kerry Washington on 'Scandal' Premiere: 'The Goal is to Break Twitter'