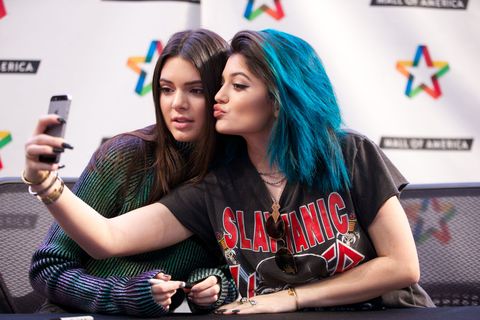 It is hard to muster up more enthusiasm about this when the people who are supposedly behind the thing we're discussing here merely announced the news with almost identically worded and timed Instagram and Twitter posts.

Kendall and I are excited to announce that we are working on our own mobile game! #KendallKylieGame #staytuned pic.twitter.com/nFlpxskhO7

We couldn't wait to tell you any longer! We are working on our own mobile game! #KendallKylieGame #staytuned pic.twitter.com/iP6RBa2NVT

Kendall and Kylie Jenner are releasing an iPhone game of their own, following the runaway (read: $200 million) success of their sister's game—Kim Kardashian: Hollywood. No other details were given, which we will take as our cue to wildly speculate.

We can surmise from the teaser art that the same developers behind KKH are working on Kendall and Kylie's Tropical Spring Break Adventure (not the real name) because their characters look exactly the same as they do in screenshots from the App Store, except superimposed onto some palm trees. Will harmonizing with digital Cara Delevingne be a task? (Will digi-Tyga, digi-Harry Styles, and digi-Gigi Hadid show up too?) Will lip-liner application be included as a gig? WHY DOES GETTING ENERGY HAVE TO BE SO HARD?

(I don't actually know what that means, but people in the customer reviews are very concerned about this, so it must be important. That's all. Bye.)

Finally, a Reason to Stay Addicted to the Kim Kardashian Game