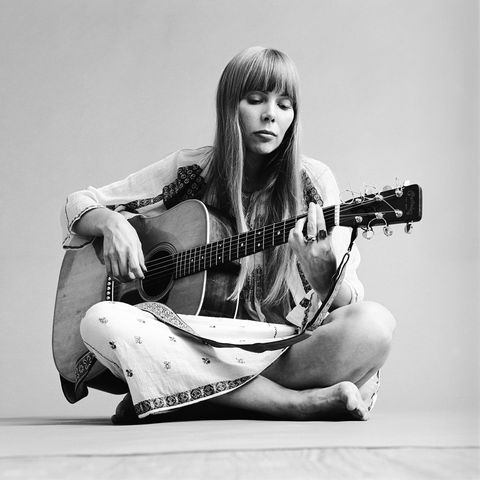 Update, 7/7: Newly obtained court documents show that Joni Mitchell is, in fact, on the mend.

In the papers, People reports, Mitchell's attorney Rebecca J. Thyne described visiting her client at home June 26: "When I arrived she was seated at her kitchen table feeding herself lunch."

"She also told me she receives excellent care from caregivers round-the-clock," Thyne said. "It was clear that she was happy to be home and that she has made remarkable progress. She has physical therapy each day and is expected to make a full recovery."

As always, we wish Joni the best.

Update, 6/29: Just says after David Crosby told HuffPost Live that Mitchell had suffered an aneurysm and couldn't speak, the record has been set straight on her website—and with good news.

"Joni did in fact suffer an aneurysm. However, details that have emerged in the past few days are mostly speculative. The truth is that Joni is speaking, and she's speaking well," a statement said on the site. "She is not walking yet, but she will be in the near future as she is undergoing daily therapies. She is resting comfortably in her own home and she's getting better each day. A full recovery is expected."

Our thoughts and prayers are with Mitchell on her road to recovery.

Update 6/1: According to a new report, we now know why the icon was hospitalized—she allegedly suffered a brain aneurysm. Billboard reports that the 71-year-old singer will be moved to a rehab facility soon, with her condition still being "very serious." Here's hoping for the best.

Update, 5/5: After over a month in the hospital and contradictory reports about the state of her health, it sounds like the legendary Mitchell may get to head home after all. The Associated Press reports that her longtime friend Leslie Morris has been appointed as her conservator, meaning Mitchell is healthy enough that plans are being made about her longterm care.

Mitchell's website still states that she is expected to make a full recovery—we have our fingers crossed.

Original story, 4/1: Iconic singer/songwriter Joni Mitchell has been hospitalized. The 71-year-old, whose songs were the soundtrack of many childhoods, was rushed to the hospital after she was found unresponsive in her home.

Sources told TMZ that paramedics were on the scene at her Los Angeles home around 2:30 p.m. on Tuesday after receiving a call about an unconscious female. She was apparently alert by the time they arrived, and is now in intensive care.

Get well soon, Joni! We'll be humming your tunes 'til then.

Joni Mitchell Is the Face of Saint Laurent's Latest Campaign

Did Joni Mitchell Kill Her Biopic Because of Taylor Swift?

10 Celebrity Pics That Prove the '70s Are Everywhere