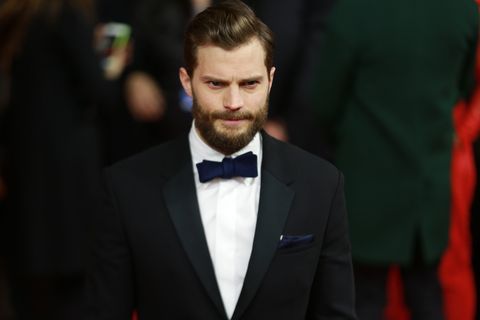 While we're blaming things on Method acting, I would like to announce I'm taking the rest of the day off to learn what it feels like to be an irresponsible employee who gets enough sleep. Hey—it's fine because it's for my craft.

Jamie Dornan basically used the same excuse to justify stalking a woman in preparation for the first season of The Fall, in which he plays a creepy dude who moonlights as a serial killer.

"I did do a couple of things to try to get inside [his mind]," Dornan said during a live chat Sunday with the Los Angeles Times. "On the Tube, which is our underground system…Can we get arrested for this? Hold on…this is a really bad reveal: I, like, followed a woman off the train one day to see what it felt like to pursue someone like that."

Dornan said he trailed the woman for a few blocks, which made him feel excited "in a really sort of dirty way." Oh? Maybe next time—but only when he's up for the role of "Murder Victim #6," of course—he could hire a dude to shadow him. Maybe then he'd understand what it feels like to be get-my-keys-out-and-in-the-stabby-position terrified.

And to the thousands of girls on Twitter who are like, "Oooooh. Christian Grey can follow me home any day?" NO. You're only making things worse for all of us.

How to Protect Yourself From a Stalker

Chelsea Peng I'm Chelsea Peng, the assistant editor at MarieClaire.com.
This content is created and maintained by a third party, and imported onto this page to help users provide their email addresses. You may be able to find more information about this and similar content at piano.io
Advertisement - Continue Reading Below
More From Celebrity
Harry Back With Will & Kate at Philip's Funeral
How Prince Harry and Meghan Honored Philip Today
Advertisement - Continue Reading Below
40 Celeb Exes Who Worked Together After a Breakup
Iconic Party Photos From the Past
The Best TV and Movie Wedding Dresses of All Time
47 'Friends' Facts Every Superfan Should Know
A Look at Royal Family Portraits Through the Years
40 Rare Photos of Grace Kelly Through the Years