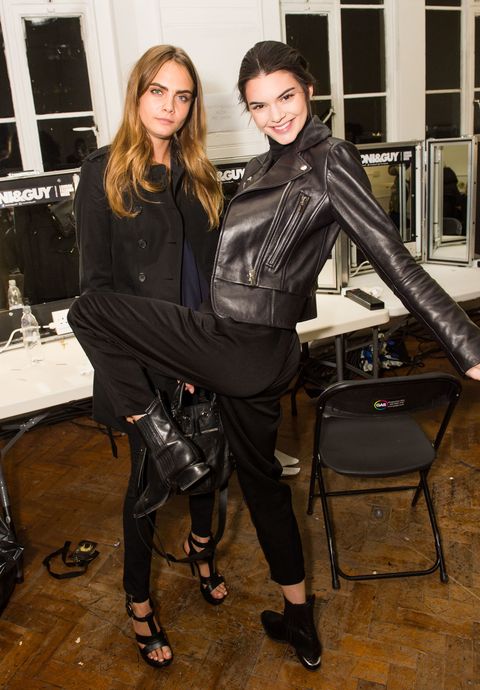 Update, 7/10: During an appearance on the Spanish TV program El Hormiguero, Cara Delevingne is fake-coerced into playing the drums. At first, she's like, "Oh no, I can't." But then she gets up there, adjusts her Dolce & Gabbana mini-dress, and goes all Chad Smith.

Update, 6/29: If a band has merch but no gigs or songs, is it even a band? Or is it simply a running joke between celebrities that continues to fascinate a nation? That is the question fans are wrestling with after the Instagram record-holding half of CaKe posted this photo Sunday.

Let's not get ahead of ourselves here, all right? That goes for everybody. *closes mock-up of CaKe-branded travel mugs*

In an Instagram posted Wednesday, Cara Delevingne licks Kendall Jenner's shoulder while Kendall Jenner, wearing blue Beats, licks Cara Delevingne's forehead. Is it their idea of an album cover? Do they usually record topless? This is still all an elaborate shenanigan, right?

Original post, 4/10: Undercover polymath Cara Delevingne has undertaken another (imaginary?) musical endeavor, prompting the question "Can you be in two bands at one time without it being a massive conflict of interest?" But wait! Does Cara's Dave Grohl-like move suggest that CaKe, her Instagram joke/string duo with Kendall Jenner, folded even before it took off? [The]

Inan interview with Grazia, Georgia May Jagger says she, Suki Waterhouse, and Cara "Pick a Side" Delevingne huddled around a fire one evening, where Dolly Parton's pink, sparkly essence prompted them to pen a lilting ballad.

"We wrote a country song one night," she says. "My boyfriend [Josh McLellan] produces music, so he helped make us a beat and we wrote the lyrics. It's about girls on the road without men, listening to the radio, that kind of thing. We've done a couple of songs."

1) At this rate, we'll have an album when I'm old enough to become president. And 2) Wasn't Cara trying to launch a solo career (with Pharrell's help) too? Eggs, meet 234,098 different baskets.

Chelsea Peng I'm Chelsea Peng, the assistant editor at MarieClaire.com.
This content is created and maintained by a third party, and imported onto this page to help users provide their email addresses. You may be able to find more information about this and similar content at piano.io
Advertisement - Continue Reading Below
More From Celebrity
Princess Eugenie's Son Got to Meet Prince Philip
Ashley Graham Is Having Twin Boys
Advertisement - Continue Reading Below
Gabrielle Union Danced Topless at a Window
Ben Affleck Is "in Awe" of Jennifer Lopez
Princess Beatrice Has Given Birth to a Baby Girl
Gigi Hadid's Mom Shared Sweet Pics of Khai
Kate & Will Probably Won't Have a Fourth Child
Ben & Jen Plan to Spend the Holidays Together
Kate & Will Are "Anxious" About Harry & Meghan
Mandy Moore Calls Breast Pump Emmy's MVP Accessory