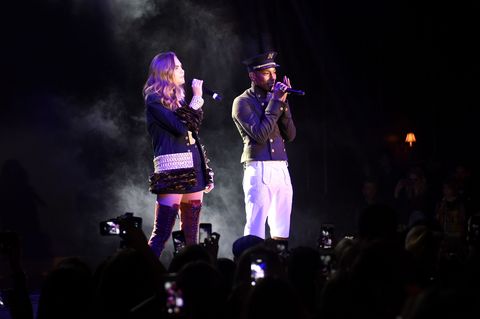 It is a Fact of Life that Karl Lagerfeld can do whatever he wants, so quite casually—on a Tuesday evening, no less—he transplanted his Métiers d'Art show from Salzburg to New York, kept the branded pretzels (leftovers?) the same, but threw in a super chill surprise performance by Cara Delevingne and Pharrell.

To an audience that included Beyoncé and Dakota Johnson, the stars of Chanel's latest fashion film "Reincarnation" sang "CC the World," a faintly creepy lullaby Pharrell wrote so he could pretend to be a bellhop, then the spirit of some monarch whose portrait hangs in Future Hotel Worker Pharrell's lobby. How was their harmonizing, you ask? Did Beyoncé call off the collaboration when Cara almost hit the [insert your own note because I don't have perfect pitch or a tuner on me]?

Watch some snippets below:

Just a little jam session at Chanel between @pharrell and @caradelevingne

Bonus Beyoncé! Compartmentalize-dancing next to the Kaiser!

The Hills Are Alive … with the Sound of #ChanelSalzburg

Cara Delevingne Talks About Typecasting, Fighting for Women's Roles to Be Better Written

Cara and Pharrell Sing a Duet for Chanel