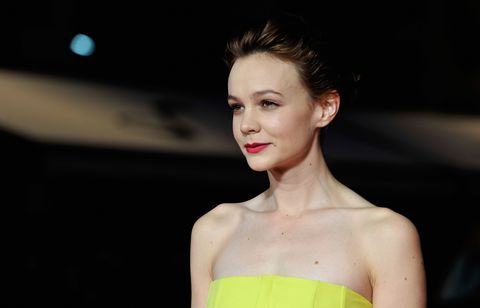 Carey Mulligan may be starring later this year in the new movie Suffragette, a film about the British women's movement, but the star admits that the industry still has a long way to go in regards to women getting similarly interesting, empowering roles.

"In terms of the amount of interesting roles there are for women it's obviously massively sexist," she told Time Out London, according to The Guardian. "There's a lack of material for women. A lack of great stories for women."

Talking more about the film Suffragette, the actress pointed out that while the film centers around strong, able women, it—like the movement for rights—took some time and convincing to get made.

"The mere fact that it's taken 100 years for this story to be told is hugely revealing," Mulligan said. "This is the story of equal rights in Britain, and it took years of struggle and women being tortured, abused, and persecuted, and it's never been put on-screen. It's such a reflection of our film industry that that story hasn't been told yet."

Hopefully these words—along with other actresses speaking up—won't fall on deaf ears in Hollywood. But in any case, we love that Meryl is ON IT.

Samantha Leal Senior Web Editor I'm Sam, the senior editor at MarieClaire.com.
This content is created and maintained by a third party, and imported onto this page to help users provide their email addresses. You may be able to find more information about this and similar content at piano.io
Advertisement - Continue Reading Below
More From Celebrity
Kate & William Are "Besotted" with Their New Puppy
J.Lo Re-creates "Love Don't Cost a Thing" Video
Advertisement - Continue Reading Below
Meghan Markle Made Prince Harry a Better Man
See a Rare Portrait of Princess Diana's Mother
Kelly Ripa's Husband Left Her a NSFW Comment
Jennifer Lopez on Learning to Love Herself
Diana's Wedding Interview Footage Is Telling
The Queen May Honor Kate Later This Year
Olivia Wilde & Harry Styles Keep It Profesh on Set
Prince Harry on How Tabloid Attacks Changed Him