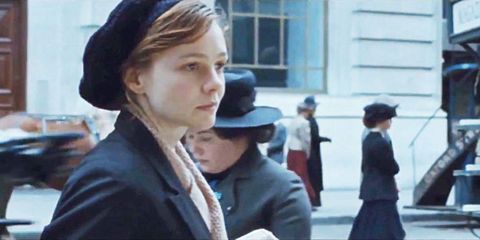 Update, 6/3: Chills. The second, infinitely more exciting trailer for Suffragette is here, and it is *so* on point. 💯

There are fire bombs, protests that end with policemen punching people in the stomach, sexual harassment in the workplace, Mery Streep giving a stirring speech as Emmeline Pankhurst, and "Landslide" by Stevie Nicks. Can you believe this took place more than a 100 years ago? Because hmmm—a lot of that stuff looks awfully familiar.

Original post, 4/15: The last notable movie about the women's suffrage movement was what—Iron Jawed Angels? If so, that was more than 10 years ago, which makes us all the more ready for Suffragette, a drama about political activists fighting for vote in early 20th-century Britain.

Meryl Streep stars as real-life revolutionary Emmeline Pankhurst, while Carey Mulligan plays Maud, a working mother "who decides she must fight for her dignity both at home and in her workplace," according to Deadline. Pankhurst and her fellow activists were known for their militant tactics, such as smashing windows and assaulting police officers, so the chances of us seeing Meryl sock a bobby are pretty high.

Suffragette premieres in October, but film company Pathé has released the trailer early in support of a major campaign urging UK women to register to vote for the general elections on May 7. (Nine million women failed to show up to the polls in 2010.) After all, there's nothing like the thought of imprisonment and force-feedings—all the cruelties our predecessors had to endure—to get you to exercise your hard-won right.

Cara Delevingne Gets Mischievous in the First 'Paper Towns' Clip