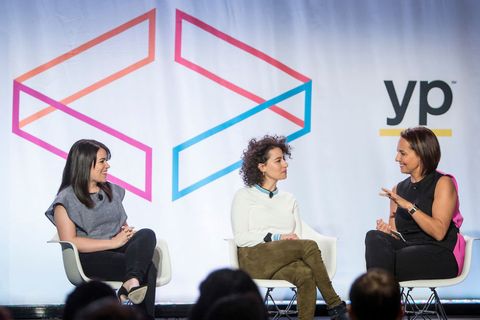 In real life, Abbi Jacobson and Ilana Glazer are almost indistinguishable from their Broad City characters—Ilana's eye rolls and hand gestures, Abbi's slight neuroticisms, the way the two so flawlessly play off each other…it's all there offscreen, in a charming (sometimes even jarring) way.

They give each other a hard time for not being able to wake up early enough to work out in the morning, and find themselves seated inconveniently behind a pole at the major tech conference where they're giving the opening remarks. Just like Broad City, it's all supremely relatable. Well, maybe except for the part about opening a major tech conference.

To kick off Internet Week New York, the two sat down with Marie Claire editor-in-chief Anne Fulenwider yesterday at Metropolitan Pavilion in Chelsea, and luckily for us, they spilled precious deets about the show's past and future.

Mark Consuelos was the original Jeremy.

"Kelly Ripa's guest appearance was so amazing because she was so down to do anything," Jacobson said. "We thought it would be very difficult to get her, but we took this person you all know as being all-American and really had fun with her. It was so much fucking fun."

"We're going to tell you an inside scoop," she added. "We didn't know Kelly, but we knew her husband Mark Consuelos because Mark Consuelos was the original Jeremy in the first pilot." Are you imagining the same scene we're imagining?

Before Soulstice, Abbi's job was going to be as a barista at Joe Coffee.

"It was basically just going to be me and this older lady customer," said Jacobson. "It was just us. She was my regular, and we always got into it."

"Soulstice is funnier and more degrading," Glazer said of the gym where Abbi is lead pube-cleaner. "We just found comedy in the Equinox-SoulCycle type of gym that's really spiritual but, like, $400 a month." In fact, given how fitness-centric NYC has become in recent years, Soulstice seems like a natural evolution of, say, Central Perk or Magnolia Bakery.

Both Jacobson and Glazer worked in search engine optimization before making it big.

Jacobson worked for TED—"I was the person who for a year uploaded all the TED talks to the TED site"—and Glazer for SkinCeuticals, a skincare line owned by L'Oréal. "When we started a web series, we were like, let's use these tools that we learned at these jobs," said Jacobson. "What did each of our web episodes have that we could tag? So it's Jews, it's New York, it's women. We were very used to being our own PR."

Jacobson and Glazer *are* more functional than Abbi and Ilana on the show.

Okay, so maybe they're not identical to their characters. At one point, Abbi's character was going to be named Carly and Ilana's was going to be Evelyn before one of their producers advised they should really consider sticking to their real names. "I'm really happy we did," said Jacobson, but it's resulted in some viewers' conflation of Broad City Abbi and Ilana with real life Abbi and Ilana.

"But we're like, 'We'll take your weed,'" chimed in Jacobson.

"It's still in there," said Glazer.

They don't love the comparisons to Girls.

Yes, Girls is a hugely successful show, and Lena Dunham is "a genius." But they're doing their own thing. "I get why people compare the two," said Jacobson. "When we originally pitched the show, Girls had just gotten picked up, and a lot of places didn't buy it because of that."

"If it's not a white dude thing, you're compared to whatever group you're in," added Glazer. "What really bothers me is when people think they have to hate one and love the other. Watch whatever you want to watch."

Jacobson and Glazer are starting to develop plot lines that will appear in multiple seasons going forward. "We get picked up season by season, but season three is the first season we're really thinking a lot about the rest of the seasons," said Jacobson. "You know, it's episodic, but to plant seeds that would amazing callbacks and stuff, we can only do that if we plan seasons in advance."

When EIC Anne Fulenwider probed about locations they hadn't shot in yet that were on their wish list, Jacobson turned to Glazer. "Should I say it?" she asked. "We've been trying to write this episode—hopefully we'll get it—on the Brooklyn Bridge. Every year, it's been hard, but we're pretty scrappy."

"We have this brilliant idea, but there was high construction going on so we couldn't get it," added Glazer. "I was stoked that we shot at Prospect Park last year. Everyone's like, CENTRAL PARK, but what about Prospect Park? It's bigger than Central Park. I always think dinosaurs are going to come out from behind the trees."

Lane Florsheim Features Editorial Assistant I'm the features editorial assistant at Marie Claire.
This content is created and maintained by a third party, and imported onto this page to help users provide their email addresses. You may be able to find more information about this and similar content at piano.io
Advertisement - Continue Reading Below
More From Celebrity
Iconic Party Photos From the Past
The Best TV and Movie Wedding Dresses of All Time
Advertisement - Continue Reading Below
40 Celebrity Sisters Who Look So Much Alike
40 Rare Photos of Grace Kelly Through the Years
A Look at Royal Family Portraits Through the Years
The 50 Most Popular Episodes of ‘Friends,’ Ranked