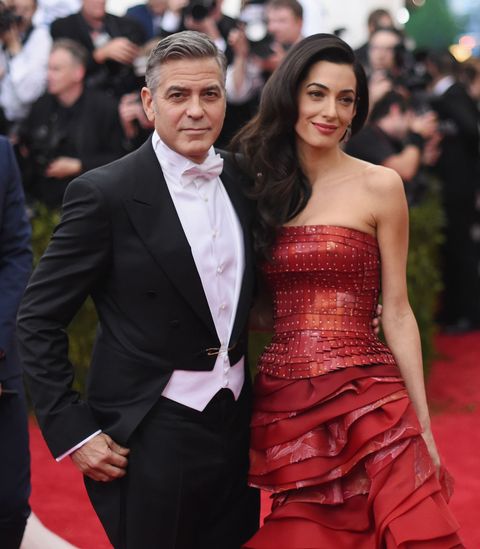 Update, 7/15: George Clooney used to be pretty "eh" about having children, but after spending time with his friends' offspring—that has to mean the Jolie-Pitt crew, right?—he has changed his stance.

According to Us Weekly, Amal Clooney and her self-described trophy husband have been visiting a fertility center and nesting, which for them involves installing a panic room in their $15 million country estate...along with a nursery. Renovations on the 17th-century mansion will be complete in Christmas, far in advance of the little one's arrival sometime next year. Phew. Good. Just imagine what it would be like if Baby Clooney and this rascal had to *share* London.

Update, 5/21: In the same Charlie Rose interview in which he recounted his ambush proposal to Amal, George Clooney let drop another news bomb: that he and presumably his bride/reluctant Comic Con companion are not super into the idea of having children.

"I've thought about it I suppose, but I haven't really," he said. "It hasn't been high on my list, uh, I've been asked a lot lately because I've gotten married and I'm doing a movie with kids in it. You should see how creative the way they ask me."

And try as he might, Charlie failed just like the rest of them to elicit from George a definite no/any one of the responses on this list.

Update 5/20: George and Amal's love story just keeps getting better. After a surprise proposal and subsequent Venice wedding, George had one more surprise up his sleeve: He told his new bride that they would be spending part of their honeymoon at New York Comic Con to promote his new movie Tomorrowland. This, predictably, didn't go over well with Mrs. Clooney.

"The whole idea of spending part of your honeymoon with people dressed up like Captain Kirk and Star Wars characters somehow wasn't easy to explain to my new bride," George said during an interview on the Graham Norton Show. "But, I showed up and it was actually fun."

Fun for whom we wonder.

Original post, 5/19: Contrary to what you believe would probably be one of the quickest yeses of your life, it took a minute (28 to be exact) for Amal Clooney to accept George's request for her hand in marriage.

George popped the big question and it came as a total surprise to Amal, he revealed in an interview with CBS This Morning. They hadn't had a conversation about tying the knot so when he got on one knee all she could say was "wow!"

After giving her time to recover from the shock (I mean, George Clooney just proposed), he finally joked, "I've been on my knee for about 28 minutes so I gotta get an answer out of this because I'm gonna throw a hip out!"

As we all know, Amal said yes and the two are currently living happily ever stylish after.

Simedar Jackson I'm Simedar, an intern here at MarieClaire.com!
This content is created and maintained by a third party, and imported onto this page to help users provide their email addresses. You may be able to find more information about this and similar content at piano.io
Advertisement - Continue Reading Below
More From Celebrity
Simone Biles Is Honored With Her Own GOAT Emoji
Kate Winslet Reveals Her Favorite Red Carpet Look
Advertisement - Continue Reading Below
Margot Robbie Had a Life-Size Cutout of John Cena
Jennifer Lopez and Ben Affleck Are IG Official
Celebs Share Their Emotional Infertility Stories
14 Candid, Unseen Photos of the Royal Family
Rare Photos From Diana and Charles' Wedding
Ariana's Former Home Has an IMAX in the Building
Cardi B Stunned in a Cherry Red Mugler Dress
Kate Beckinsale Reveals She's Never Been on a Date