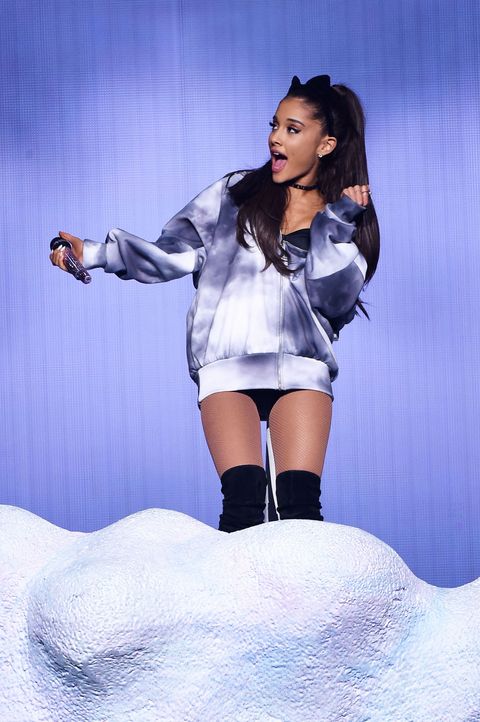 Update, 9/16: Sorry Ari is still apologizing for Doughnutgate, but with a new fragrance and track to promote, she had to grin and bear it.

"First of all, my behavior was very offensive and I apologized," she said during a Good Morning America appearance Tuesday. "There's no excuse, or there's nothing to justify it. But I think as human beings, we all say and do things that we don't mean at all sometimes."

She also said that she now understands"what it feels like to disappoint so many people who love and believe in you." May we all never be able to identify with that statement. Amen.

Update, 7/14: Ariana Grande will get off scot-free for her doughnut lick-and-run, the Riverside County Sheriff's Department confirmed to Entertainment Weekly. Police investigated the video for "deliberate food tampering," but Wolfee Donuts' owner decided not to press charges against Grande, whose contrite YouTube video below suggests she will never stick her tongue where it doesn't belong again.

"Seeing a video of yourself behaving poorly—that you had no idea was taken—is such a rude awakening," Grande said in a YouTube confessional posted Friday, which lasts four minutes and contains two references to the alleged "emergency oral surgery" that prevents her from performing at Saturday's MLB All-Star Concert. "It's like you don't know what to do. I was so disgusted with myself. I, like, shoved my face into a pillow and wanted to disappear."

In the security-camera footage TMZ released Wednesday, the 22-year-old pastry violator also tells backup dancer Ricky Alvarez she hates our great nation and everyone who lives in it. She is sorry for that too.

"With the advances we've made in the past couple months, and all the progressive things that have been going on, I've never been prouder of this country, actually."