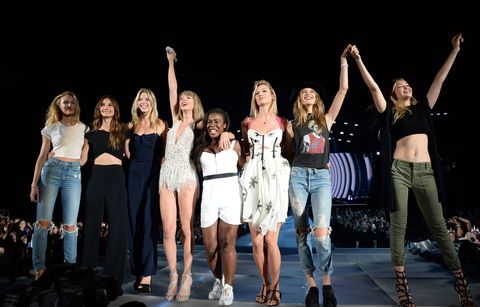 Sixty years from now, when octogenarian Taylor Swift has completed her sold-out farewell tour, gotten Katy Perry back for making more money than her and Beyoncé combined, and cured the common cold, she will harness her formidable celebrity-gathering powers and become a chat show host. It could happen.

During her concert in New Jersey on Saturday, the musician whose badass-bitchery is so palpable *Jennifer Lawrence* had to acknowledge it brought out the usual suspects for "Style," plus one more famous person we have never seen in this context before: Uzo Aduba of Orange Is the New Black fame.

Tayzo/Uzaylor then shared the love via their social channels extensively.

Trying to find words to express the INCREDIBLE concert @taylorswift13 had. The 1st words are genius, fun, generous. #1989TourEastRutherford.

I love youuuu! That was so much fun! What an awesome Saturday night. I like your Style ;-). https://t.co/Jmx8pQ2G0Q

Mark my words: It won't be long before we see an Insta of them baking Anne Burrell's chocolate chip cookies together. Which is another way of saying the Taylor Swift Army just got a new lieutenant.