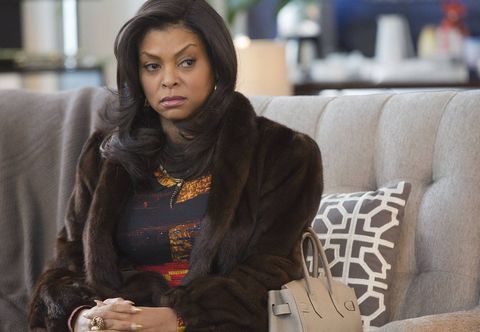 Update, 8/7: The full trailer for season 2 of Empire is here, and it's everything you want it to be. Family drama, label drama, prison drama...all the drama. And Cookie. Watch is below:

Update, 8/6: Not like anything could make Empire better but...Mariah Carey is going to be on the show next season, reports E!. DID YOU HEAR THAT? MARIAH CAREY. Cue us throwing our hands in the air, praising the universe for this gift, and and fanning ourselves.

No word yet on what the five-time Grammy winner will bring to the recording studio—we need to know, like yesterday. But given the show's impeccable musical taste in lyrics and beats, we can already see whatever she sings breaking charts and taking names.

P.S. Congrats on the star on the Walk of Fame, Carey!

Original, 7/23: If, like us, you've still got "Drip Drop" stuck in your head, you too are counting down the milliseconds until the next season of Empire. Thankfully, because cooling our heels has been damn near impossible (we need our Cookie fix), the second season trailer has drip drippity dropped.

The teaser is only 30 seconds, but like every episode from Empire's freshman season, it's packed with can't-look-away drama, complete with the tag line: New Money, New Music, New Power.

To see Lucious' fall from relative grace in a bright orange prison jumpsuit, Cookie clad in a couture gown trapped inside a cage, Jamal owning the crowd at a #FREELUCIOUS show, and Boo Boo Kitty with her claws out, go ahead and click play on the vid below. The season will premiere two months from today on September 23, at 9 pm on FOX.